Valley of the Dead Movie Review

The story of zombies is often told in many different movies and always makes a terrible impression. For those of you who like zombie-themed movies, a movie called Death Valley might be one of your movie recommendations.

In the movie Valley of the Dead or the original Malnazidos title, you will see zombies from the Spanish Civil War. Horror how? This is a review and summary.

Valley of the Dead movie synopsis

This 101-minute film follows the events of the year 1938 when the Spanish Civil War broke out.

It all begins with a wedding interrupted by the arrival of Nazi soldiers. The scene then switches to Captain Jan Lozano (Miki Esparbe), a lawyer and captain of the fifth brigade who is about to be sentenced for treason.

Under the pretext of saving Lozano, his general and uncle sent Lozano to send an important letter to a dangerous area and must break through enemy lines.

Lozano departs with a young man who is also a prisoner, Decruz (Manel Llunel). Along the way, they plan to save a crashed plane, but the two of them encounter a group of enemies.

The rebel group is about to capture Lozano and Decruz when suddenly a strange event occurs. The pilot’s corpse suddenly turns into a zombie and bites one of the rebel members, who later also become zombies. They all then tried to run away.

When the group reaches the rebel base, they discover all their friends have died and come back to life to attack them.

After getting off the boat and into the river, they escaped and found a house. There were several people hiding in the house with different circumstances. There were fascist soldiers, nuns, to a Muslim man.

The group also believes that they don’t need to care about war anymore. Now they just need to unite to fight the zombies that are now their enemies. While resting, Captain Lozano realized that the letter he was carrying contained a map.

He believes that the map is a map of the distribution of the zombies, and that they are currently in an unsafe area. Armed with a map, the group sets out to save themselves.

Along the way, one by one, they died from being bitten by a zombie, while the rest continued their journey until they reached a church.

There, they met a woman still wearing her wedding dress. The woman tells that her marriage was destroyed by German soldiers, who then spread a strange powder and turned all the dead into zombies.

Lozano also concluded that the zombies were an experiment carried out by Germany and his country’s government.

Those left behind fled again and planned to return to the place where Captain Lozano was assigned. Lozano believes that the creator of the virus has an antidote there.

But on the way, Decruz is bitten by one of the zombies. Reaching the area they were aiming for, the General would not allow Lozano to lead his friends in.

They fenced off the area to be safe from the zombies that were their test subjects. Lozano and his team also devised another strategy. At that time, Decruz who almost turned into a zombie took the initiative to commit suicide by bringing a bomb to the safe fence area.

After turning into a zombie, Decruz managed to break through and blow up the fence. Lozano and the rest of his party stepped in and scattered to find an antidote to the virus they were looking for.

But one by one they die and come back to life until only Lozano and the woman of the rebel group known as the Priestless Killer remain, and the young Muslim boy Rafir.

Lozano was even bitten by a zombie, but the Priestess Killer saved him by amputating Lozano’s bitten hand.

When they realize that there is no antidote for them, the two decide to go by train. Lozano and Priestess Killer managed to survive and reach a safe area. 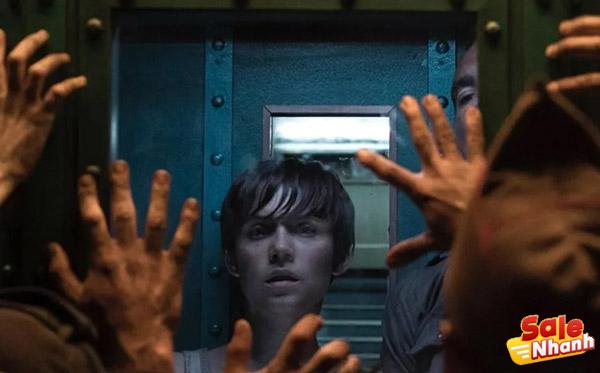 As a movie of the horror genre, Valley of the Dead has a rather scary image throughout the film.

We can even feel this from the beginning of the movie, although the zombie attacks have not yet appeared. The cinematography of this film tends to use the dark tones typical of horror movies so that you can feel the horror of this movie.

After the film’s plot enters the conflict section where the first zombies begin to appear, we will continue to be presented with the terrible design through the characters of these zombies.

With scary faces and gore, we will also be nervous when watching the main characters in the movie try to run away.

The appearance of this zombie character sometimes appearing with jumpscare scenes will surprise you and make this movie even more tense. So be prepared to watch a movie with pretty terrible visuals, friends!

A huge movie with many epic scenes

The movie Death Valley is said to be a huge movie with too many supporting characters in the movie.

So we can also see some pretty epic scenes in this movie that will give you goosebumps watching it, especially the huge scenes featuring zombie characters in this movie.

At the beginning of the film, we are immediately shocked by the mass shooting scene at the wedding.

Towards the end of the film, the attack of hundreds of zombies that surrounded Lozano and his party from all directions as they tried to escape became the most epic scene in this Death Valley movie. The different effects used also make this scene more scary.

The background story is underexploited to the maximum

Although it manages to provide a rather scary scene with a variety of images and scenes, the movie Valley of the Dead actually has shortcomings in exploring the context of the story.

For those of you or viewers who do not know the history of the Spanish Civil War, it may be difficult to understand the plot of this film.

From the beginning of the film, it is not explained about the background of the events and the main characters in this film.

So maybe you will be confused when you see Captain Lozano suddenly being attacked by a group of enemies from where or also confused when suddenly there are Nazi soldiers in this Spanish army camp.

Although this zombie movie has a rather unique and different premise compared to other zombie movies, when the zombie story is combined with historical stories.

Unfortunately, the background excavation of the story is not explored to its fullest extent making this movie seem to prioritize only the zombie story.

Well, that’s the review of the movie Valley of the Dead, which will present a gruesome scene of zombies in wartime. Are you brave enough to watch the terror of zombies in this movie? Put your hand in the comments if you’re ready to see it!