Under the new king’s rule, the kingdom of Dahomey is trying to separate from the larger and more powerful Oyo kingdom. With the Agojie women’s special force commanded by General Nanisca, they suppressed the slavery that occurred on the African continent in the 1820s.

However, Nanisca’s struggles collide with the presence of people from her past who cloud her thoughts.

The Woman King is an epic historical drama film by Gina Prince-Bythewood released by TriStar Pictures on September 16, 2022. Featuring a formidable and captivating performance by Viola Davis, this film is the fiction of history that once took place in the Kingdom of Dahomey, now in Benin..

Once delayed during filming due to the spread of the Omicron variant in South Africa, the film premiered at the Toronto International Film Festival on September 9, 2022 to positive feedback.

Does the quality of this film deserve to be placed on the list of the best historical historical films? Check out the following review to find out the full review!

Meanwhile, a girl named Nawi was assigned to the palace by her father because she did not want to get married. Greeted by Izogie, Nawi is taken to the ladies room in the palace.

Under the direction of the Agojie Knights, these women not only from Dahomey are forged to become a new generation of respected women’s special forces in Africa. Nawi trains hard under the guidance of Izogie and the direct supervision of Nanisca. However, his stubbornness and lack of discipline almost got him expelled from the palace.

But because of his strong desire to become Agojie, he was able to defend himself to prove his prowess as a knight candidate.

When the new general of the Oyo Kingdom, Oba Ade, requested the Dahomey Kingdom to pay tribute to 20 more Agojie members, Nanisca and 19 women of her choice completed the request and arrived at the port of Ouidah.

Instead of surrendering, they tried to fight Oba Ade and his troops. Almost defeated, Nanisca and her army returned safely.

The new captain of the Portuguese fleet, Santo Ferreira, arrives in Ouidah. Together with Malik, his partner and friend, he continued the slave trade in Africa.

Malik is very impressed with him and wants to get to know him more. The night after the inauguration of the new members of Agojie, Nawi spoke to Malik.

From him, Nawi received information that the army of the Oyo Kingdom, supported by several armies from other kingdoms, was advancing to attack Dahomey. Nanisca reveals the secret she has kept for so long, that Nawi is her biological daughter.

Giving birth on the run from the abominations of the Oyo Kingdom’s army, she entrusts her newborn baby to a group of missionaries. The sign that Nawi is his son is the shark tooth that he planted on Nawi’s left arm.

Nanisca and the entire army of Dahomey Kingdom implemented a war strategy using gunpowder. After blowing up the stronghold of the Oyo Kingdom’s army, they attacked and succeeded in repelling the large number of enemies.

But unfortunately, some Agojie were taken prisoner. One of them is Nawi. Along with Izogie, he prepares to be sold into slavery.

Because of her victory in battle against the armies of the Oyo Kingdom, King Ghezo appointed Nanisca as his Lady King, who would rule by his side.

Just before the coronation, Nanisca received information about the whereabouts of Nawi and Izogie from Fumbe, one of the Agojies who managed to escape from the train that took them to Ouidah.

Although Nanisca’s request to save some of his members from the snare of slavery was denied by King Ghezo, Nanisca insisted on going it alone. Along the way, several Agojie and male soldiers join him to save his daughter.

Meanwhile, after undergoing various tortures, Nawi and Izogie are brought to the stage to be sold into slavery. Izogie and Nawi execute their escape plan. But unfortunately, Izogie died after being shot by Portuguese soldiers and Nawi was again taken into custody.

Can Nanisca and Agojie’s army save Nawi? Will Nawi choose to go with Malik to Europe, or stay with Agojie to protect his homeland?

Find the answers to all these questions by watching this exciting movie to the end. Don’t make the first move after the credits title ends, because there’s still a scene that invites a question mark. The name Viola Davis has long been shining in the Hollywood movie industry. Usually he appears in Oscar-worthy dramas such as The Help, Fences and Ma Rainey’s Black Bottom. She has also acted in action films, such as Amanda Waller in the DC Extended Universe series.

But this is the first time Viola Davis has acted in its truest sense, both physically and mentally. As General Nanisca, she has a tough and dignified appearance as the leader of Agojie, the Dahomey Kingdom special force consisting entirely of female knights.

He looks agile and tough in every fight and fight scene, and can also show appreciation when showing long-buried heartbreaks.

We’ll be surprised by the totality of this film. Viola Davis really transforms into the role of a war general from Africa, not only in appearance but also exuding inner turmoil before injustice.

Nanisca’s shaky toughness in the presence of a character in the past who has left a deep wound is convincingly shown. The smell of revenge appeared almost endangering himself and his army.

But on the other hand, he also expressed the desire of a mother to find her child. It turned out that Nawi was the girl he dumped first.

Maybe it’s still too early, but Viola Davis’ energetic performance in this 2 hour 15 minute film could help her shortlisted for various film awards.

Viola Davis’s positive energy is also channeled to other actors who appear equally polished. Some of them even managed to steal attention.

Lashana Lynch, who plays Izogie, made an extraordinary appearance. Not only does she have the physique of a female knight, but her expressions and gestures in each scene also really reflect the image of a woman with the aura of a knight.

John Boyega, who has always looked like a young Denzel Washington, brings to life the character of King Ghezo, who always looks forward to his people, not leaving the traditions of his ancestors.

He showed the side of a king who was reading the right steps to become the leader of his people so as not to be humiliated by his enemies and European empires.

But what caught my attention the most was Soo Mbedu’s acting as Nawi. This South African actress has successfully transformed the character of an innocent girl into a tough knight.

In the film, Nawi identifies herself as 19 years old and is considered by Nanisca to be younger than her age. But who would have thought that if he had already turned 30 in this movie debut? 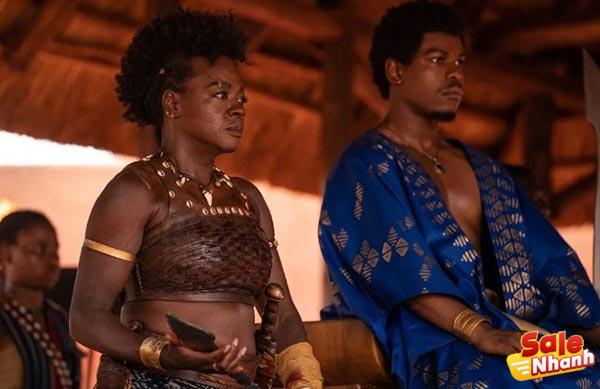 Gina Prince-Bythewood is a director credited with presenting the story of African-American lives.

Since his first film, Love & Basketball, he has mastered African-American life in pursuit of sports success. Anti-discrimination nuances are increasingly emphasized in the film The Secret Life of Bees.

After releasing her first action movie, The Old Guard, to positive reviews, Gina Prince-Bythewood took the action to the next level with the well-choreographed The Woman King.

It can be said that he has successfully shown a large-scale film of equal quality and commercial value through this film.

If you look at the plot, there is really nothing that distinguishes this movie from other historical historical films. Especially movies with themes about the struggle against injustice, such as Braveheart.

The main character also carries a psychological burden that affects the fighting spirit. The feud between kingdoms interfered by colonists has also been presented in many other films. The difference, however, is the hard-working direction of Gina Prince-Bythewood. He was able to make the tempo enjoyable to enjoy, the tempo was constant, though it sagged a bit in the middle.

This skillful work is also supported by trustworthy people in their field. Dynamic editing, especially when it comes to action scenes, is the work of Terilyn A. Shropshire. The music is composed by Jazz musician Terence Blanchard, who has the ability to convey sublime African music.

There’s only one thing that’s technically lacking in this film, and that’s the seemingly cheap use of visual effects.

A rather striking scene is the appearance of fire during the battle between the Agojie army and the Oyo Kingdom army in the middle of the film. The lack of detail in the implementation of these visual effects more or less hinders the awesomeness of the battle.

Kingdom of Dahomey in history The Kingdom of Dahomey was founded in West Africa between 1600-1904. This former kingdom is now part of the state of Benin. The reign of King Ghezo, between 1818-1859, is the historical setting for this film.

During its reign, the Kingdom of Dahomey succeeded in overthrowing the greater power of the Oyo Kingdom. This fact is told with patriotic spirit in The Woman King.

The historical character present in this movie is only King Ghezo, the other characters are completely fictional, one of which is Nanisca. Meanwhile, Agojie’s army was indeed a formidable force during the reign of King Ghezo.

In the film, the Kingdom of Dahomey develops palm oil production as an alternative to income from the sale of slaves. In fact, the production of this oil did not bring enough income to the kingdom, so King Ghezo returned to the slave trade with the colonial nation.

Of course, with some historical details that don’t match the description in the film, let alone very contradictory, that should not make us less interested in enjoying the movie Queen.

In addition to the actors’ smooth acting, The Woman King is technically believable, which adds to the quality of the film, which was shot in South Africa.

It’s still too early to be announced as an Oscar nomination. But with the quality presented, it is not impossible that this prediction will come true.

Are you ready to witness the toughness and agility of Agojie’s legion in battle? Watch this movie ASAP, yes! Like watching.