The Gray Man is a Netflix original action-thriller film directed by Anthony and Joe Russo and starring Chris Evans and Ryan Gosling that will premiere on July 22, 2022 on the Netflix platform.

The Gray Man is an adaptation of the 2009 novel of the same name by New York Times best-selling author Mark Greaney. Synopsis Gray Man tells the story of a CIA agent being hunted around the world when he discovers a great secret of the organization.

The Gray Man isn’t the only action movie starring the Russo brothers. Both have been known for a long time through the production of famous films such as Captain America: Civil War (2016), Avengers: Infinity War (2018), Avengers: Endgame (2019), dan Cherry (2021).

The production of the film The Gray Man has been underway since 2021 with a location in Prague, Czech Republic. The film cost US$200 million in production, making it the most expensive Netflix original on par with Red Notice (2021).

In addition to Chris Evans and Ryan Gosling, the characters in The Gray Man movie will also be played by a number of famous stars such as Ana de Armas, Billy Bob Thornton, Jessica Henwick, Julia Butters, Alfre Woodard, Dhanush, and many others. . 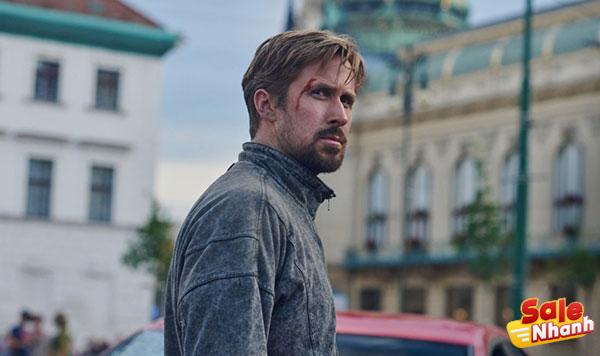 The story begins with the meeting between Gentry Court, who still has a 2031 sentence for his murder, and Donald Fitzroy in prison. Donald’s appearance is to reduce the sentence and even free the Court as long as he wants to join the CIA program, which is to become an assassin known as Project Sierra with the code name Sierra. Six.

Before his death, the target (Callan Mulvey) of the Bangkok mission reveals that he worked on the Sierra program as the Sierra Four, and Four says that Six will be chased and killed sooner or later. like him while also handing you a microchip containing important information.

At first, Six doesn’t believe Four’s words, but after he escapes and calls the CIA director, Daniel “Denny” Charmichael (Rege Jean-Page), he investigates the contents of the chip Four had stolen. to send. 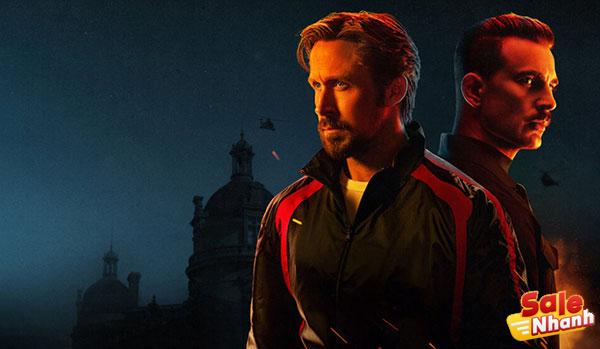 Denny Carmichael is also the main agent in the assassination mission or can be called the mission leader of Six’s superiors. In the end Six decides to refuse to evacuate Bangkok and tries to find out the contents of the drive the Sierra Four gave him. This is also the beginning of a series of days on the run when Gentry is hunted by a psychopath named Lloyd Hansen (Chris Evans) to the corners of the world. Because Gentry has exposed the organization’s darkest secret.

Six sends the contents of the drive to Fitzroy and his other former manager, Margaret Cahill (Woodard) before arranging a departure from Thailand. Fitzroy and his teenage niece, Claire, are eventually kidnapped by Lloyd Hansen, a mercenary and rogue torture expert on the payroll of Carmichael, who is out to get the drive before any further information. which information is disclosed. Placing them in a villa in Croatia, Hansen repeatedly tortures Fitzroy for information regarding Six and the thumb, while also threatening Claire several times, to the objections of Carmichael’s right-hand agent, Suzanne Brewer.

In a state of emergency, Donald orders his team to kill Six on the plane, but to no avail. Frustrated by this failure, Denny sends Suzanne to oversee Lloyd’s work. Donald and Claire are imprisoned by Lloyd in Croatia, where he controls his operations from a castle.

Lloyd mobilizes the best assassins and mercenaries around the world to track down Six in exchange for large sums of money.

Meanwhile, Six heads to Vienna to receive new documents. But it turns out he was betrayed by his own soul mate, who was tempted by a gift from Lloyd.

Six is ​​trapped in a well while Lloyd and his team arrive. Six tried to escape by flooding the well, but Lloyd was able to catch up to Six and fight him.

After detonating the grenade, Six was almost caught by Lloyd had it not been for Dani drugging him. Then Six was also drugged by Dani and taken away. When he regains consciousness, Six convinces Dani to take him to Margaret Cahill’s house in Prague. Margaret managed to decrypt the data sent by Six and reveal everything to them.

Knowing Six’s location, Lloyd sent troops to Margaret’s house. Dani manages to get out of the house using the car Margaret gave him, while Six tries to save Margaret but fails as Margaret sacrifices herself so Six can get out safely. However, when he got out, he was arrested by the police and handcuffed in a city park while waiting for the SWAT team to arrive.

Things did not stop, Lloyd’s mercenary army immediately rushed over and attacked Six as well as the police here. These soldiers did not hesitate to shoot the police, making Suzanne angry with Lloyd for this action.

A street chase ensues that wreaks havoc in the city center. With Dani’s help, Six manages to paralyze all of Lloyd’s troops and escape with Dani. 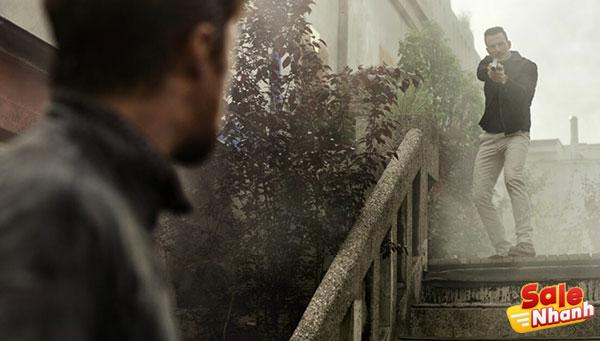 That night, Six and Dani sneak into the hospital to track Claire’s whereabouts from her pacemaker.

But they must overcome the onslaught of Lone Wolf, a Tamil assassin who has stolen a necklace containing secret data from Six. Lone Wolf gives the necklace to Lloyd when Six and Dani attack their base. Six tries to free Donald and Claire, but Donald chooses to sacrifice himself so they can both escape Lloyd’s pursuit.

Dani confronts Lone Wolf, but at the end of the fight, Lone Wolf gives the necklace and leaves. Lloyd takes Claire hostage and takes her into the labyrinthine garden. The six must fight Lloyd to free Claire.

Can Six beat Lloyd? Will this CIA plot be exposed? For the answer, watch this fascinating movie till the end. Watch the movie to directly answer your questions!

There are many famous stars in attendance

Gray Man made Netflix spend its biggest budget on an original movie. More than $200 million has been disbursed from the popular streaming platform’s coffers to produce an action movie that subscribers will love.

Of course, the biggest funds are allocated to attract top stars as actors. Ryan Gosling, Chris Evans and Ana de Armas are the three stars taking on the main roles in this 2 hour 2 minute movie.

The title The Gray Man itself is played by Ryan Gosling as the Sierra Six, who works undercover on various difficult CIA missions. Ryan Gosling performed quite well, as if combining the two characters he played in Drive (2011) and The Nice Guys (2016). 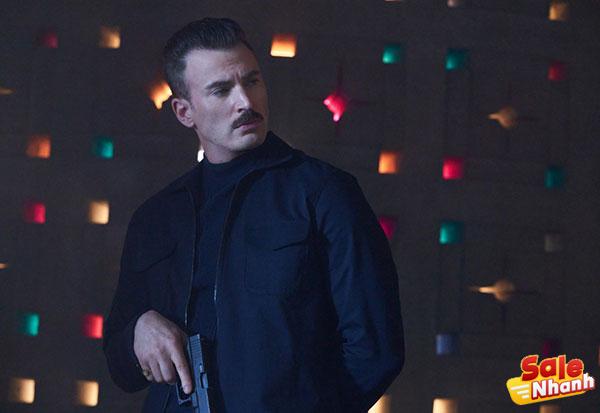 The blunt expression accompanied by an annoyed growl when injured are the distinguishing features of this character. His agility in action and forcefulness when pressed make the character the pivot of the film’s story.

Meanwhile, Chris Evans makes an annoyed appearance as an arrogant assassin with a gangster mentality who isn’t afraid to break all the rules and taboos to complete his mission.

And Ana de Armas is pretty much the sweetener to the story without any of the characters delving deeper into the meaning. Really, the three main characters in this movie are not fully equipped with background so we see a lot of holes in the plot.

Although presented in flashback scenes, they all appear with the impression that it is forced to increase the intensity of the main scene. One example is when the final fight scene between Six and Lloyd. When Lloyd buries Six’s head in the water, Six suffers from his father’s abuse.

In addition to the awkwardness, this flashback scene also appeared quite late and could not raise the tension of the film any higher. If the three main characters don’t have enough background, don’t expect other characters to develop in the story.

Indeed, the actors in this film did a great job portraying their characters, but one actor stole the show: Jessica Henwick as Suzanne. In addition to his strange appearance, his acting is also full of emotional outbursts.

The Russo Brothers are a duo of filmmakers who have worked on several films of the Marvel Cinematic Universe, including Avengers: Infinity War (2018) and Endgame (2019).

Their name seems to be a guarantee for the most powerful action sequences in a movie that can become a magnet for audiences. But also remember, they are not good at acting in dramas in the movie Cherry (2021).

In a way, this also affects the dramatic side of The Gray making it not handled properly. The storyline doesn’t seem to be neatly organized to take us to an emotional flow as a whole.

Just when we find out Donald has a grandson, a flashback scene pops up briefly detailing the relationship between Six and Claire.

This series of flashbacks is actually too short to underlie Six’s emotional attachment to Claire, and vice versa. The effect is seen in the climactic scene where the reason Six saves Claire time and once again feels emotionally flat.

Indeed, this film with a rather dark cinematic background is a bit weak in terms of drama and script, but we will be entertained by many powerful, fast, noisy and epic scenes. Furthermore, the visual effects are very neat with a well-maintained rhythm.

Although we can see that there are some similarities between the action scenes and other action movies , it is not a problem as long as we are just looking for fun from this movie.

For example, the scene of a train moving through the city, capsizing and destroying some buildings almost reminds us of one of the scenes from F9: The Fast Saga (2021) that we just watched last year.

The fight choreography is also very slick and hard to see with the help of dynamic camera movements. The inclusion of Tamil star Dhanush adds to the tension of the film with two very intense and fast fighting scenes.

Of course, the international impression of spy movies is strong with locations in many countries and actors from many different nationalities. 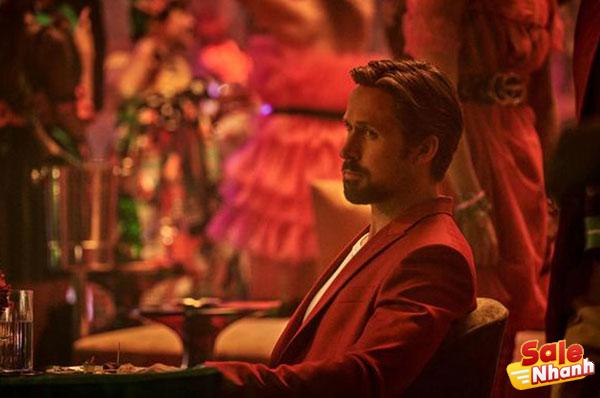 As a spy movie, The Gray Man doesn’t have much to offer. It is inevitable that there is much in common with films with similar themes.

The action scenes are like repeats of previous spy movies so there is no sense of innovation. Likewise, the plot has minimal character development.

Even Six and Lloyd’s descriptions seem odd. Six is ​​an agent who uses old methods and uses minimal technology, while Lloyd uses all the latest tools in every action.

Lloyd’s look should have been more modern than Six’s, but what was presented was just the opposite. Six appeared in the latest fashions and Lloyd looked old school with his bushy mustache.

Many scenes in this movie remind us of the actions of James Bond, Ethan Hunt, Jason Bourne and other spy heroes.

In particular, the film also has a location in Prague, like this one. Not meant to open up spoilers, but the ending of this movie is quite disappointing.

Lloyd did not lose at the hands of Six and Denny Carmichael, who was clearly guilty of his various duties, was indeed forgiven by CIA officials. USA

maybe this is the bridge to the story in the next movie, where Six still has a lot of work to do.

As a new addition to the spy genre, The Gray Man appears less than optimal and appears to be just a collection of action sequences of spies with a new interpretation.

In addition to a potentially poorly structured script, the characters are also poorly exploited making this film a risky platform for a franchise.