Finally, another Box Office movie was released, not from Hollywood, but from the country of China called Skyfire. Its launch won the number 1 spot all over China.

Currently, profits are still relatively small, just $24.8 million, but will continue to grow as broadcasts in other countries continue.

This 1 hour 37 minute disaster movie tells the story of the great disaster of the long dormant TianHou volcanic eruption. Director Simon West has really portrayed panic in this movie. In addition to the good story, there are many moral messages given in the Skyfire movie.

TianHou Island is a rather large island with over 50,000 inhabitants. This island is located in the China Sea. There is an active volcano there and it is being observed by a team of researchers led by a volcanologist named Wentao Li (Wang Xueqi).

Wen visits TianHou Island with his wife and only daughter Xiao Meng Li (Hannah Quinlivan). But when he was seriously observing, the TianHou volcano erupted. Everyone immediately saved themselves, including Wife Wen and their separated daughter.

Unfortunately, Wen arrived too late to help his wife while his daughter was taken to safety by residents. The hot cloud then descended at a speed of 400 km/h, sweeping away everything in front of it. Wen’s wife died before his eyes.

20 years later, Xiao Meng joins a group of volcanologists. He worked and then returned to TianHuo Island to oversee and implement a large project capable of making predictions about the activity of the TianHuo volcano – where Meng’s mother died. 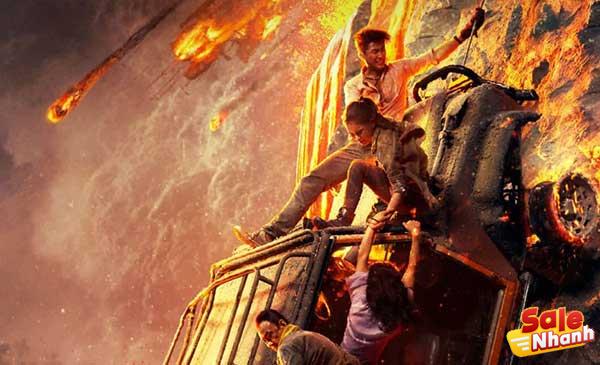 In addition to observing mountain activities, Meng also works for a billionaire businessman named Jack Harris (Jason Isaac), who has just opened a super luxury resort with full high-class amenities. At the time, a second phase of development of the alias resort was underway.

The project that Meng worked on was a success. Now all the volcanologists working there can see the progress of TianHou’s volcanic activity. But when left overnight, suddenly the mountain showed unusual activity. Lava rises too fast. This immediately caught Meng’s attention.

Meng immediately told Jack about it. But Jack didn’t really respond because Meng only came by his intuition, while there was no other data and evidence. Sure enough, when Meng was about to prove to Jack by climbing the volcano again, a shock occurred. The mountain will explode.

Unfortunately, many tourists are on the observation bridge and very close to the crater. Meng’s father, who had been following TianHou Island to watch Meng’s project progress, immediately ran over to announce that everyone was in danger. It was too late, the volcano erupted.

Wen and Meng and their colleagues then put all the visitors on a skycar to return to the resort. The situation at the resort was no less chaotic. People panicked because of the explosion from the mountain rocks due to the eruption everywhere; The fire spread and burned down almost the entire resort.

Such a big bad thing turned out to be the beginning. Major eruptions are still happening and will happen at any time. Meng is concerned for the island’s 50,000 inhabitants because if the dam breaks, they will not only be swept away by lava, but also by floods. Fortunately, many resort guests have been evacuated, so Meng is not dizzy anymore.

Thanks to the help of Meng’s partner, Zheng (Shawn Dou), the residents can be saved. The dam was opened so that the water could be released slowly before it was destroyed by the lava. Meng’s mission now is to leave the island. After returning to the station to call for help, Meng and the others left while his father was left behind.

Meng is confused because he does not want to lose his father, but on the other hand, he also has to save his remaining teammates. Manh promised to come back to pick up his father.

But after Meng and the others got into the helicopter, the mountain finally exploded. From the helicopter, he could see a flame sent by his father to let Meng know his father’s location, but it eventually disappeared, swept away by hot clouds.

Meng was extremely upset, but after getting on the evacuation boat, it was reported that the rescue team had found a survivor after a hot cloud caused by entering a lava pit.

That person is Wen, Meng’s father. He said that Meng was late in saving him because Wen knew the lava pit from the project Meng was working on. Meng and Wen finally regrouped.

10 minutes into the movie, I was heartbroken with Wen’s wife passing away. Really sad because his wife actually died right in front of his eyes. Wen couldn’t do anything because while chasing his wife, the car he was driving overturned and trapped Wen. 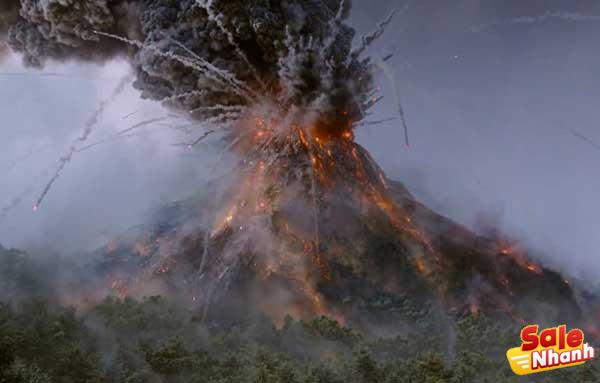 Then Wen looked at his wife, who said goodbye by saying ‘goodbye’ just as a cloud of heat rushed towards her.

Another sad scene is when Jack Harris, the owner of the resort, saves a small child lost from his mother. Jack gave the child to the boat and he ended up dying in the harbor waiting for his estranged wife.

Admittedly, the way of shooting, CGI effects and things related to film depiction is still better in Hollywood than in other countries. One of which can be seen in this movie, there are some underperforming scenes. So it looks like a cheap movie.

Although in another scene, cinematographer Alan Caudillo was able to show how amazing the resort is, the beauty of Tuan Hao Island and the cool volcano there. However, this movie had a pretty good cinematography. 2 thumbs up for Mr. Alan Caudillo!

This movie is actually made in two language versions; Chinese and English. However, after deliberation, the final decision was to use Chinese for most of the dialogue in the film because it felt more natural; Considering the context, people and others are very strong with China. 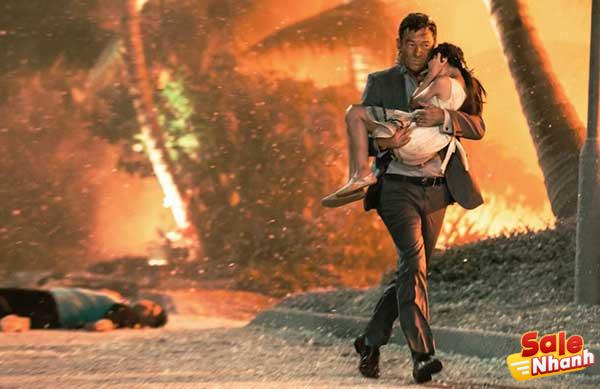 The Skyfire series currently airing is rumored to be the first in a trilogy. This means that there will most likely be a similar movie released next year. Will it continue to discuss the volcanic disaster or discuss other disasters? We will just wait!

Salenhanh.com gave it a 3.5/5 rating for the whole movie, starting with the story, acting, actors, background sound and footage. Meanwhile, Rotten Tomatoes scores 57%, IMDb 5.3/10 and Metacritic 52%. In essence, this movie is perfect for those of you who love watching movies about disasters. Cool!