The movie Quintessential Quintuplets Movie (2022) or The House of 5 Bridesmaids is an animated romantic comedy film adapted from the comic book of the same name. Eiga Go-Toubun no Hanayome Movie is the sequel to the anime series that aired from 2019-2021.

Since this film is a sequel to the anime series, the story continues the story in the anime series. Follows the six main characters with the focus on Usegui Futaro, a high school student who works as a part-time tutor for the Nakano quintet.

After the Nakano quartet confessed to Futaro, who would Futaro choose in the end? This is the most complete review from Salenhanh.com

It begins with Futaro, who ends up marrying one of Nakano’s children. However, when opening the scene where the bride is waiting, Futaro is surprised by the inquisitive behavior of the 5 siblings.

Back five years before Futaro’s wedding. Now Futaro and the Nakano group students are preparing for the school festival while preparing for the exams. At that time, Ichika was the first child who couldn’t attend the festival because she was busy with filming after becoming an artist.

Meanwhile Itsuki is trying to improve his grades so that he can continue his studies to university to achieve his goal. Nino, Yotsuba, and Miku are in the same class as Futaro, and are busy planning festival activities. 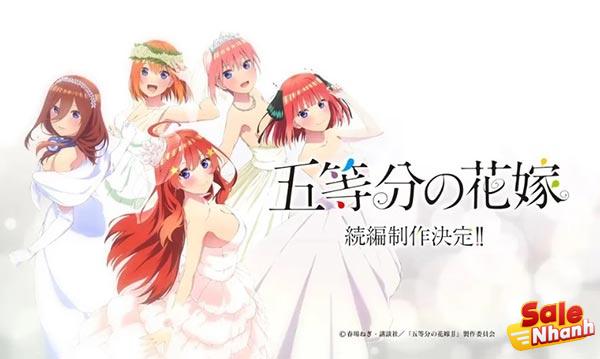 On the same day, Futaro had an appointment with the Nakano quintet. He plans to make an important announcement to Ichika, Nino, Miku, Yotsuba, and Itsuki about his feelings. Then, at the appointed time, the six of them gathered.

Futaro mustered up his courage and said that he liked Nakano’s quinces. However, he still hasn’t been able to determine which twins he really likes. So Futaro asked for more time to finally give them an answer.

The atmosphere became a bit awkward, but Ichika broke the ice by offering them to eat and drink what was prepared.

Futaro tries to escort Ichika to the taxi. While waiting for a taxi, Ichika teases Futaro about who he really likes. However, Futaro says that he cannot choose the year. Ichika then asks not to tell that to her other siblings.

On the second day, Ichika received news that Yotsuba had been taken to the hospital. He immediately goes there and meets Futaro and Nino. After learning about Yotsuba’s condition, Nino asked Futaro to take Ichika home.

On the way, they wandered around the city, where the night seemed narrower than the day. Afterwards, Ichika once again teases Futaro by asking him to instantly identify his chosen one.

When Futaro was about to buy drinks at the vending machine, Ichika said what kind of drinks his brother likes. He urges Futaro to choose one of the drinks he mentioned, because that way Ichika can find out who Futaro has chosen.

Two days passed and finally the last day of the festival arrived. A fateful day for Futaro and the Nakano group.

Before Futaro’s final answer was given, the Nakano quintet thought back to the past days of the festival. Starting from people with problems to those related to Futaro.

Now, Ichika, Nino, Miku, Yotsuba and Itsuki are waiting for Futaro to choose one of them. And they waited for Futaro separately in some room.

The five twins waited anxiously, while Futaro, couldn’t help but give them an answer. So, who will Futaro choose? 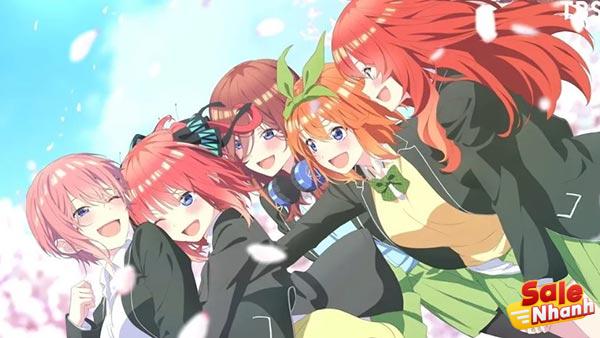 The length of the movie is long enough

For me, the cinematography and visuals of this film are quite good. Although it looks simple, the visuals are smooth and the characters look lively. However, I can’t compare this movie version to the manga or the anime, as I don’t follow both.

This movie is quite long, about 2 hours and 15 minutes. The plot takes place at the school, precisely during the three days of the festival. While the story is divided into five stories, each story follows the story of the Nakano five sense group including Futaro in it.

Although it seems a bit slow, the story can still be enjoyed. Even for those who don’t follow manga or anime, I was able to follow the story line.

Moreover, because it was helped by the flashback of some stories that happened before. So it was quite helpful for me to understand the plot and relationships of each character.

The story of choosing a partner

This movie is the story of Futaro and the Nakano quintet. After how long have known each other; starting from Futaro working as a private tutor for Ichika, Nino, Miku, Yotsuba and Itsuki, all 5 of them like Futaro.

The sequel to this anime series focuses on the story of Futaro, who wants to answer the Nakano group. At first, I thought Futaro would pick the whole year, since it’s a harem-themed anime. However, at the end of the movie, Futaro ends up choosing one of the five twins.

The reason why Futaro chose one of them was explained by him. Until the end Futaro with the girl of his choice got married for the next five years.

Interestingly, even though both of these Nakano groups liked Futaro, they let Futaro go by their choice. In fact, you can say that they still provide the best support, despite being sad that they weren’t selected.

The movie has a rating of 8.5 on IMDb, while on MyAnimeList, the movie has a score of 7.64. Both have pretty high ratings, right? So this movie is worth watching, especially for those of you who have followed the anime and manga series.

Although in my opinion there are some stories that are a bit forced and unimportant, but overall this movie can be enjoyed and not boring, although the plot is a bit slow.

All the main characters also go through the development process. Although there is a main character that according to fans is completely undeveloped.

Furthermore, quite a few anime and manga fans are disappointed with Futaro’s final choice, as they don’t like the chosen character. But, for me the ending of this movie is still interesting and happy. Has anyone seen this movie? What do you think?