No one in this world can live alone and everyone needs the presence of others. Having friends to talk to is a basic need.

A friend to talk to is a necessary silhouette when someone is feeling lonely. When you feel lonely, time runs slower.

It takes someone else’s shadow to get through the weight of this phase. In Punch-Drunk Love, a lonely man is in the same trouble as falling in love. How’s the story? Take a look at the movie synopsis and reviews below.

Barry Egan is the owner of a company that sells state-of-the-art toilets. He has seven sisters. One day, a car accident happened on the street near Barry’s office.

One of the cars blaring a harmonium on the street. Barry brought the item to his office. He then stored it in his room.

After saving the harmonium, a woman approaches Barry. The woman’s name is Lena Leonard. Lena is a co-worker with Elizabeth (Emily Watson), one of Barry’s older sisters. Lena asks for help leaving her broken car near Barry’s office. Without thinking, Barry agreed to Lena’s request.

While at work, Barry’s sisters called one by one. They asked if Barry was going to dinner with his family. Barry takes all of their calls.

Barry agreed to the invitation. Then refused to go to his other sister. Barry really didn’t want to come because his brothers used to work with him.

Elizabeth goes to Barry’s office. He asked if any of his friends had come. He also convinced Barry to come. The reason was, Elizabeth also invited Lena to come.

Barry was even clumsy when he heard that Lena was coming. Barry struggled to refute. He agreed to come to the family dinner. 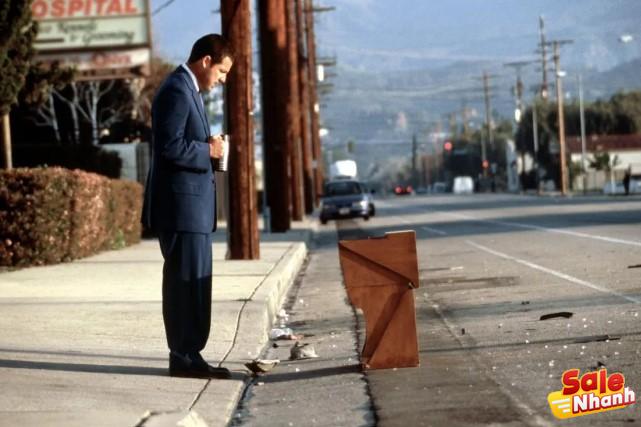 During a family dinner, Elizabeth tells Barry that Lena won’t be coming. Barry was teased a lot by his sisters.

Barry’s sexual orientation was targeted. Barry got very angry and then broke his sister’s window. Then he approached Walter, Elizabeth’s husband. Barry asks Walter for a referral from a psychiatrist.

The phone operator asked Barry for personal data. Barry put his home and work address on his credit card number. Not long after, Barry received a call from a woman named Georgia.

The next morning, Barry received another call from Georgia. This time Georgia pretended to borrow money. Barry did not answer. Then he went to a supermarket.

He found that there was an airline promotion for people who bought a pudding set. The more puddings you buy, the longer the distance the winner will choose.

Lena went to Barry’s office to pick up the car. He boldly said that he cared about Barry. The lighter was that he had seen a picture of Barry’s family. Lena invites Barry to dinner. At the same time, Georgia called Barry’s office. Barry tried to concentrate. He promised to have dinner with Lena.

Barry begins to feel in love with Lena. Meanwhile, Georgia is just a cover for blackmailers. Georgia is actually a subordinate of Dean Trumbell, a mattress store owner.

Dean sends four of his men to find and get money from Barry. Will Barry and Lena’s relationship survive the tough times?

Elevating the story of a lonely man

Punch-Drunk Love features Barry as the main character. Barry is no ordinary person. He worried too much. The presence of the seven sisters did not help either.

They even mocked Barry more often. So Barry’s emotions can explode at any moment when he feels depressed or offended. 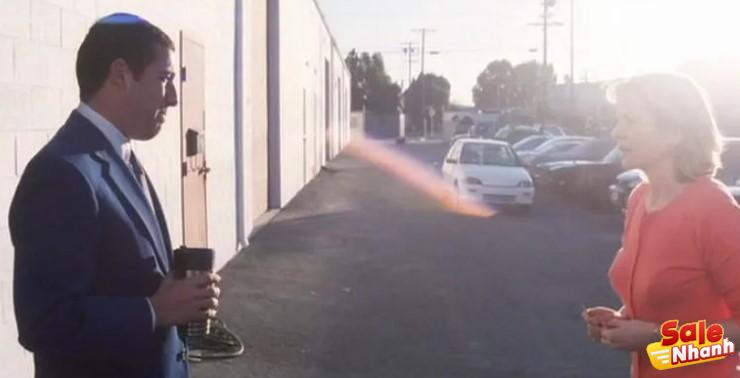 In short, Barry can be called a lonely man. He lives in his house alone. The only people who interact with him are his employees. That’s why he tried the phone-sex service. Barry wasn’t excited at all when Georgia teased him. He just wanted someone to talk to.

Loneliness makes Barry do the unexpected. He took the harmonium to his room. Although he is not capable of playing it.

He bought a lot of pudding for a chance to win the chance to fly. He didn’t know where he was going. In fact, he displayed the pudding in his office.

The love story of Barry and Lena in Punch-Drunk Love is made weird. The rigid Barry with women is paired with a very warm Lena. The combination feels believable. Moreover, the two did not show any spark of love. Their love was built quietly and slowly.

It was interesting to see the interaction between Barry and Lena. The two of them didn’t talk much. In fact, in some scenes, they look very awkward. But not because the two lack of harmony.

Barry’s character is created depth, not a person who can fit in with society. The awkwardness gradually changed as the dynamics of their relationship progressed.

There are some scenes that show Barry and Lena’s love being very eccentric. While eating at a restaurant, Barry broke the toilet. He’s angry that his sisters told Barry stories as children.

Barry returned to the bloody table. Lena wasn’t surprised by her reaction. Even when kicked out of the house, Lena still considers the evening as normal.

There is also a scene where Barry and Lena make love. The words of the two of them were not romantic at all. Cinematographically, this film presents a polished treatment. Many telephoto and even wide shots are used.

Barry and Lena’s intimate scene at the hotel is beautifully staged. They are highlighted by minimal lighting. It’s as if we see the shadows of the two of them emerging. 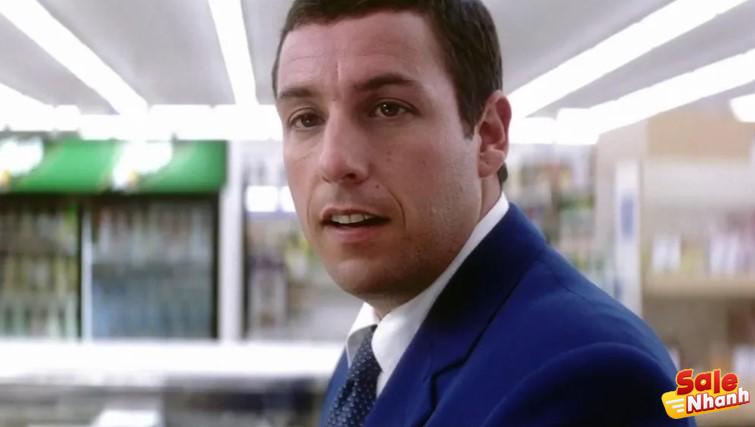 Adam Sandler looks different in Punch-Drunk Love. The actor is used to acting in romcom movies. The difference in this movie is that he plays the darkest character he has ever played.

It is not uncommon to see the actor appear clumsy, aloof and lonely. This role can make the audience aware that the actor’s face can lead him to discover the role.

Sandler shows off his acting skills in this movie. See how he transforms into an aggressive character when pressed. Even if he had to face four of Dean’s men.

Change does not come suddenly. The plot gives us insight from the start that Barry’s character can be an aggressive character.

Punch-Drunk Love is not a romcom genre that makes audiences laugh. It runs strangely for a melodrama.

95 minutes is not a long time to watch a touching movie. Moreover, it is equipped with an eye-catching cinematic experience. Which romantic movie do you think is unique? Make recommendations in the comments column, guys!