What if you were suddenly kidnapped by a tycoon in search of treasure in a long-lost city? Not without reason, in the city indeed existed and kept an extremely valuable treasure. The movie The Lost City caught my attention with a really light-hearted adventure story, but packed with humorous lines and situations that brought a successful laugh.

Sandra Bullock has spent the last few years starring in a variety of films, focusing on dramas like ‘The Unforgivable’ and suspense, ‘Bird Box’. But now he is back again playing in a romantic comedy called ‘The Lost City’.

Movies like these, such as “While You Were Sleeping” and “Two Weeks Notes” have catapulted him into the ranks of Hollywood’s top actresses. And his latest film is also supported by other leading Hollywood artists such as: Channing Tatum, Brad Pitt and Daniel Radcliffe… promises to bring the audience a great movie.

Synopsis of the movie The Lost City

A novelist named Loretta Sage (Sandra Bullock) is trying to finish her book titled The Lost City of D. She is having a hard time determining the ending of the story because many things weigh her down. in her mind, including the death of her previous husband. also often participates in research for her novels. In the end, he gave up and finished the novel to his liking.

However, the novel with a lot of romantic spice is still loved by many thanks to the good looks of Alan (Channing Tatum), whose cover image is the character Dash in the novel.

Right after the press conference, Loretta is kidnapped by two errands from a corporation named Abigail Fairfax. After being investigated, it turned out that Fairfax had also read Loretta’s novel The Lost City of D. Fairfax with a huge fortune has the ambition to find the ancient treasure mentioned in the novel.

He then asks Loretta to help him find the treasure by translating the meanings of the ancient symbols on the clues about the treasure’s location. However, Loretta firmly refused. Without further intervention, Fairfax immediately forced Loretta to go to the lost city. What would Loretta do in this situation? Find out the answer by watching the movie The Lost City at the cinema right now Reality is not as beautiful as the story in the novel

In this film, Loretta’s character often admits that the novel The Lost City of D has a cheesy romantic plot. Dash’s character is described as a prince riding a horse to save his daughter. On the one hand, Alan feels pretty close to Dash’s character. He wants to save Loretta like Dash did in the novel. In fact, Alan is almost 180 degrees different from Dash. He didn’t come by carriage and wasn’t good at fighting.

Alan’s imperfect character is what makes the adventure story in this movie all the more interesting. A lot of bad luck happened because of their own actions. The way they deal with precarious situations to escape the pursuit of criminals is also very funny. A funny scene as they prepare to light a campfire to warm up.

If in a romantic fairy tale, a campfire will be lit by a powerful prince by rubbing stones. In an attempt to survive, Loretta lit a bonfire using essential oils that turned out to be Alan’s eczema cure. Meanwhile, Alan’s eczema accidentally recurs leaving the two in an interesting dilemma. 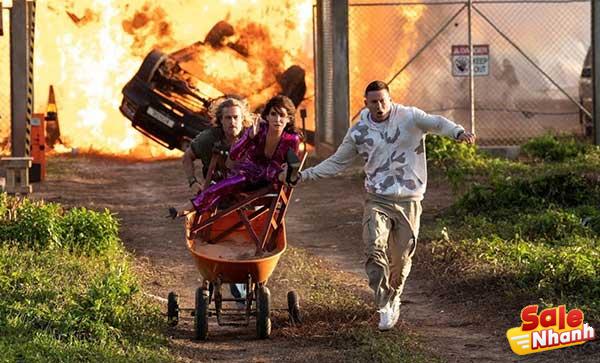 Personal opinion about The Lost City

As Salenhanh.com said, the approach to the situation comedy in this film is conveyed quite well. Movies with comedy situations are often quite susceptible to mixed reviews because many people will not like the “light” laughs. However, throughout this movie, there are many successful scenes that make the whole cinema laugh. Not only from the described situation, but also from the dialogue.

The story itself is actually very simple and light although some would say it’s rather cliché as it has the same plot format as an adventure movie in general and a happy ending. bring a lot of laughter and relaxing moments. If you like funny, interesting movies, then The Lost City is also a great choice for you.