Howl’s Moving Castle is one of the most recommended movies for anime lovers even though this anime has been out for a long time. This film is one of the most successful films released by Studio Gibhli , directed by Hayao Miyazaki and produced by Tosiho Suzuki . Howl’s Moving Castle is adapted from the English novel of the same name by Diana Wynne Jones.

Howl’s Moving Castle is one of the highest-grossing films in Japan and on September 5, 2004 premiered at the Venice Film Festival. So don’t be surprised if this movie is nominated for Best Animated Feature at the 78th Academy Awards 2006. If you’re interested in the film, read the synopsis and review here. Salenhanh.com before looking to see this movie from 2004.

Sophie is an 18-year-old girl and the daughter of a hatmaker who is thinking, thinking many things. She is actually a beautiful girl, but she is always insecure. Sophie has always considered herself less beautiful and attractive, unlike her sister Lattice. 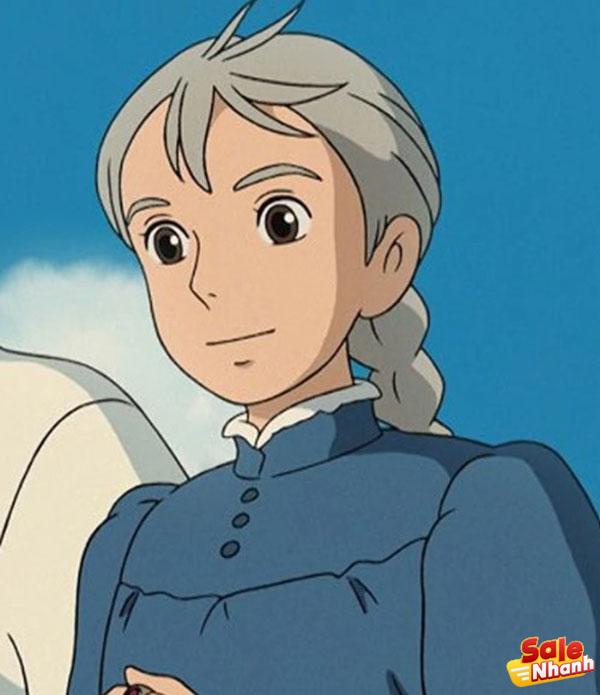 One day, meet a handsome witch that all the girls talk about. His name is Howl. Howl is being chased by another wizard, who eventually escapes and takes Sophie to the shop where Lattice works.

Lattice reminds Sophie to be careful with Howl, as it is rumored that Howl ate the heart of a beautiful woman. But Sophie didn’t think she was beautiful, so she didn’t worry about it.

Turns out the witch who tried to capture Howl was The Witch of Waste. That evening he went to Sophie’s shop to ask to make a hat. But Sophie refused on the grounds that the store was closed. The witch got angry and cursed Sophie and turned her into a 90-year-old old woman, but Sophie couldn’t tell anyone about the curse. 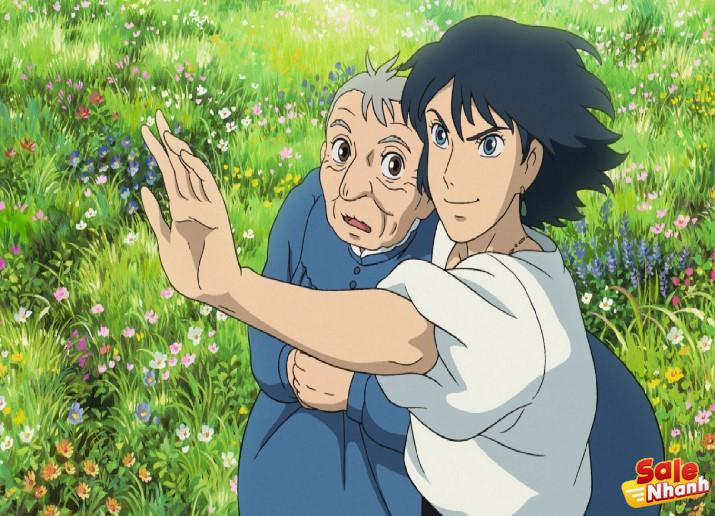 Not wanting to surprise her mother and sister, Sophie decided to leave the house and find a way to escape the curse by going to the Waste or the valley where the witches were discarded. In the valley, Sophie encounters a scarecrow she seeks to help, then the scarecrow escorts her in the form of an old man to Howl’s mobile castle, where he eventually meets the fire demon Calcifer and his assistant. Howl is Markl. Shopie also offers to become a cleaner in the castle.

It turns out that the castle has a magical door controlled by Calcifer. Every time the castle doorbell rings, Calcifer will give a warning and Markl will disguise himself as an old man.

When the first bell rang, someone asked the whereabouts of the wizard Jenkins. However, when Markl opened the door a second time, Sophie saw a different person and place. The person asked about the magician Pendragon. Why do you think Jenkins and Pendragon are in the castle? While here only Howl the owner of the castle, Markl and Calcifer live.

She was curious and kept opening the doorknob that took her to different places. While she was still confused, Howl walked through the door. Then who is Howl? Pendragon or Jenkins? Can Howl help Sophie break the curse the outcast witch has placed?

This movie is the best animated movie I’ve seen since I was a kid. It features strong female characters, beautiful witches, curses and villains. The most interesting element of this movie is Howl’s moving castle, which is Steampunk-style and has a unique design because it is supported by two chicken claw-like legs. 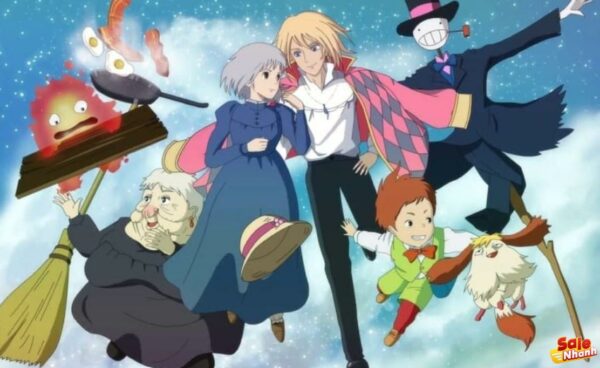 We will find some details such as breakfast and lunch packed like eating at a fast food restaurant, although we find them in a castle that usually serves luxurious royal fare. These give the film an eccentric impression.

Miyazaki presents the opening of the film beautifully. The scene begins with the appearance of the castle from behind a thick layer of fog. The castle moves from place to place by jumping up and down.

The appearance of a castle from afar against the natural setting has been used in many other Studio Ghibli films, most notably Nausicaa in the Valley of the Wind (1984) and Laputa – Castle in the Sky ( 1986). In the film we can see strange objects appearing from a distance naturally. The opening of a movie like this is most often used by Miyazaki.

Characters with unique imaginations also exist in Calcifier, the Fire Devil that specializes in eating eggshells and leftovers. Despite being a fire demon with great power, it still likes to complain and like to praise.

There is also a character Howl called a great wizard character who also has a uniqueness. Your baby will release green mucus when feeling upset. In the film, Howl is told that he was very disappointed when his hair changed color because he thought it made him less handsome. Howl spits out his slime and makes everyone in the castle think it’s too much or too much. 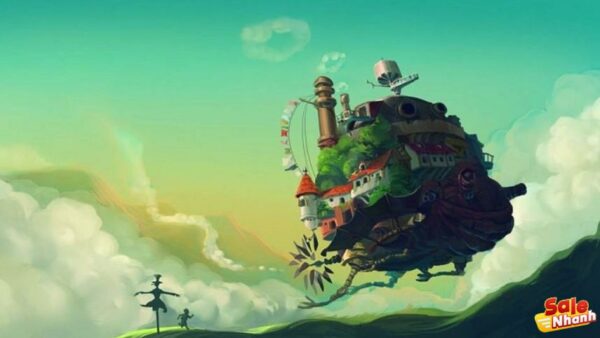 A different movie from the original novel

The film is directed by Hayao Miyazaki, different from the novel version. The plot is similar, but the cinematic version is enhanced in the style of Miyazaki. The film version tells the story of Sophie, a developing character.

Shopie, who always thinks of herself as an ordinary woman and has no confidence compared to her beautiful and famous older sister, has finally changed. She has developed into someone who can accept that she is also a beautiful woman and has special skills beyond being famous.

The film’s settings are set in wartime and its main plot includes Howl avoids war for the sake of pacifism, anti-warism. This story is also a bit different from the story in the novel.

Another difference lies in the story of Howl and Sophie’s relationship, in the novel there is often debate, but in the film this scene is not shown much.

In the novel, it is explained that Sophie has two brothers, but in the film she has only one sister.

Even so, Wynne Jones, the author of the novel Howl’s Moving Castle, remains satisfied with the final result of the film. According to Wikipedia, Jones said the film was phenomenal even though he was not involved in making it. The story in the movie is different from the book and it should be. But this movie is still great. 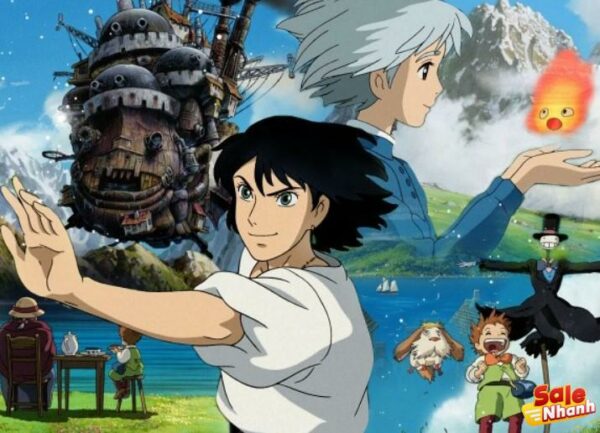 Physical and emotional transformation in all personalities

Overall, all the main characters in this movie undergo a transformation, be it due to a curse, magic or disguise. Like Sophie, for example, she was cursed by a witch named The Witch of the as an old woman. There is also Howl’s assistant, Markl, who was originally a child, but when he went out, he disguised himself as an old man.

The most iconic visual transformation is when Howl becomes a giant bird. The witch of the waste then undergoes a transformation using her magic to become a maiden, though she eventually turns back to a helpless old woman having lost her magical powers.

These transformation screens are presented with beautiful visuals, enriching the story with many elements of magic. What’s more important is that the transformation adds variety to the characters in the film. 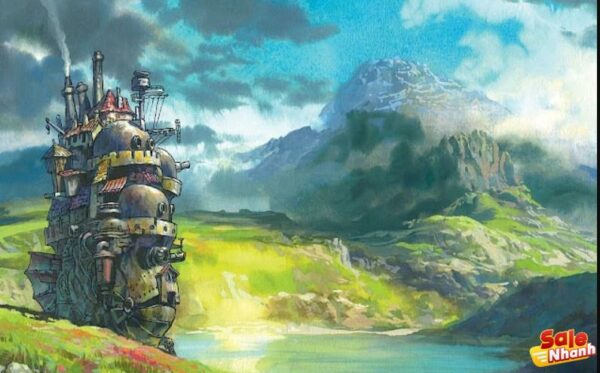 This movie focusing on the character Sophie brings a very good moral message to the audience. Sophie shows the power of the heart to love. Anyone would do everything possible for our loved ones. In the film, Sophie does everything to save her loved one, Howl.

The most memorable, however, is when she saves and falls in love with a witch who was supposed to be her enemy for cursing and turning her into a 90-year-old old woman. This is what makes those around me love Sophie. This movie ends sweetly with a twist at the end of the story.

Howl’s Moving Castle combines fantasy, reality and science mixed into one beautiful animated film. Much can be learned from this film by Hayao Miyazaki.