After the previous movie, Detective Conan: The Lost Train in the Sky, which aired in 2010, now fans of Detective Conan are back with a new movie that is guaranteed to be more interesting. its predecessors: Conan: 15 Minutes of Silence 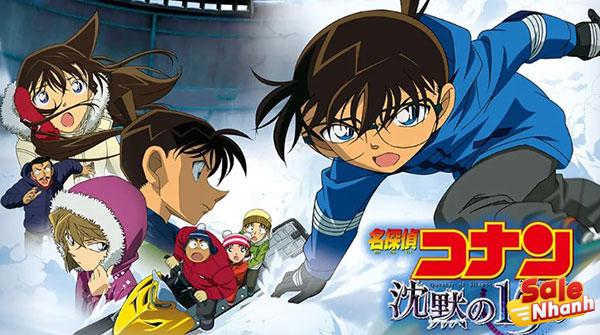 Quarter of Silence is about a murder case involving several people in a village in the Kitanosawa region. In addition to the murder case, it turns out that there is something terrible that puts the villagers, and their visitors, in great danger. What is really happening? Check out the article below with Salenhanh movie Review !

Trailer of the movie Conan: 15 Minutes of Silence (Quarter of Silence)

Tokyo is currently celebrating the opening of a new Touto line that will be inaugurated by the Governor of Tokyo, Yuichiro Asakura. But the day before the opening, the governor received a threatening letter, which was immediately sent to the central Tokyo police headquarters. Inspector Megure also intervened with his men.

Inspector Megure, Miwako, Takagi and the others started guarding on D-day. They enter the train that will take them to the new track. Meanwhile, Conan and the detectives and Professor Agasa, who were on vacation, started to enter the intersection just below the passing train.

Conan, who is listening to the threatening letter, accidentally sees a mysterious person standing at the exit of the tunnel. He caught a glimpse of the mysterious figure carrying a remote control and staring at the top of the tunnel. Just as Conan tried to check if anything was wrong, it turned out that a bomb had been planted on the roof of the tunnel.

Fortunately, Conan was able to make this terrible incident happen with the consequences of a not too big accident. This makes Conan wonder what really happened to Governor Asakura that made him receive the threat?

He eventually found out that Governor Asakura had been supervised to build a dam in Kitanosawa City, Niigata Prefecture.

Due to the construction of the dam, the people of Kitanosawa were forced to move to a new area and let their old houses sink due to the water stored in the dam. Conan eventually speculates that information about the bombers could be found in Kitanosawa and ends up making a trip there.

The trip to Kitanosawa was not done alone, Conan set off with the young detectives, Prof. Agasa, Kogoro Mouri, Ran and even Sonoko participated. They were introduced to a group of locals; Keisuke Yamao, Mizuki Toono, Fuyumi Tachihara, Takehiki Mutou, and Shougo Hikawa. 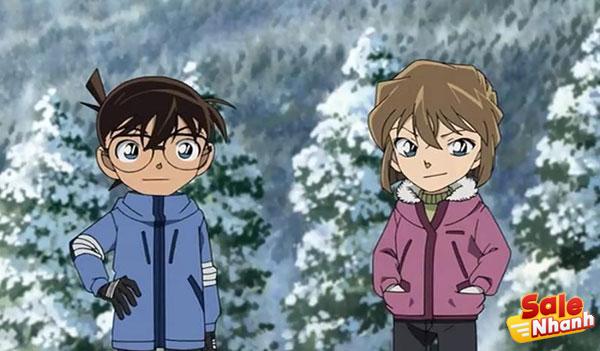 The four of them reveal that they are all childhood friends and part of a group that moves to a new village. This is also the first time Yamao has been jailed for killing Mizuki’s sister, Natsuki Toono, in a hit and run.

The next morning, Fuyumi’s son, Touma Tachihara, wakes up from an 8-year coma due to an accident he was in (seen at the beginning of the film). Even though he was awake, he couldn’t remember what had happened. Touma was examined further, Tachihara was truly grateful that his son was able to regain his sanity.

Leaving the two of them behind, Conan’s group along with a guide from the hotel, Mizuki, set out for a walk to see swans near the lake. When he got there, he saw Hikawa, but when he got close, Hikawa was already dead. Kogoro and Conan begin the investigation; they found no other footprints despite the heavy snow.

They finally assumed that Hikawa and the culprit had arrived, and when it snowed, the snow covered their footprints. The culprit who killed Hikawa then went back to the village so that the footprints were mistaken for Hikawa’s. In the end, it was handed over to the police.

In the morning, Conan’s group left the hotel to watch the sunrise. On the way, they meet Touma crying. The detective took Touma to see the glittering snowflakes to cheer him up.

But instead Touma got a headache; shows that his memory is slowly recovering. Unexpectedly, someone mysteriously watched Touma from afar.

As Conan investigates Hikawa’s belongings, he finds a tip about a theft at a jewelry store the day before Mizuki’s sister’s high-profile murder. Through these clues, Conan finally finds the culprit to be Keisuke, who fled to Kitanosawa to hide his booty.

Unfortunately, he runs into Mizuki and Touma’s sister instead, who happen to be there seeing everything. Keisuke also kidnapped Touma. When coming to the bend, the car collided, causing diamonds to scatter. This explains why Touma’s memory partially returned after seeing snowflakes. Touma managed to escape but had an accident.

Suddenly, explosions occurred at several antenna stations of phone and internet providers. At that time, the detectives and Touma were going to the area where Touma fell in the hope that Touma’s memory could come back completely if they got there, so they didn’t know that there was an explosion everywhere. . At the same time, Touma is being targeted by a mysterious person. 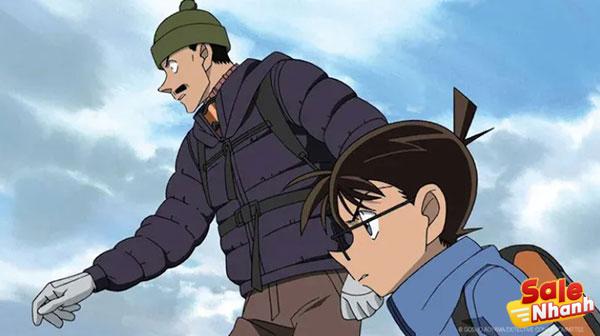 The detectives and Touma run for their lives and meet Conan and Ai at the Dam. Arriving at the dam, Conan is pursued by Keisuke, who intends to kill him.

Keisuke is then crippled by Mizuki from being shot. As everyone gathered at the dam, Touma then remembered the incident 8 years ago that actually involved Mizuki.

Suddenly the dam explodes due to a bomb placed by Keisuke, who wants to drain the contents of the dam to recover the money stolen from his grandmother’s house that has sunk.

This is why he tried to mess up the train line to Kitanosawa and destroy the supplier’s antenna station so that news of the dam failure wouldn’t get out.

Conan immediately took action because the dam could destroy the entire Kitanosawa city. He made a winding trench in the snow in hopes of an avalanche and closed the entrance to Kitanosawa, which he succeeded but Conan was buried in the snow instead.

Knowing this, all helped find Conan until he was finally rescued and the case solved.

The circumstances of the case are complicated

When watching this movie, viewers will think that Keisuke is the one who caused all the terrible events in Kitanosawa 8 years ago, from the death of his sister Mizuki to the news of the death of Fuyumi’s son, Touma. . But it turns out the incident wasn’t entirely Keisuke’s fault.

Mizuki’s sister seems to have fallen on the highway after being pushed by Mizuki herself because of the two of them arguing. Being hit by Keisuke’s car, Mizuki gets scared and takes advantage of the situation to blame Keisuke. This case eventually became intertwined with Touma, who saw two events at once.

Please note, Conan is a 7 year old boy with the brain capacity of a 17 year old boy. But it seems Conan can do everything on his own, including dangerous things, throughout the film, from stopping hundreds of cars from driving through a bomb site to creating a massive avalanche to save the village. 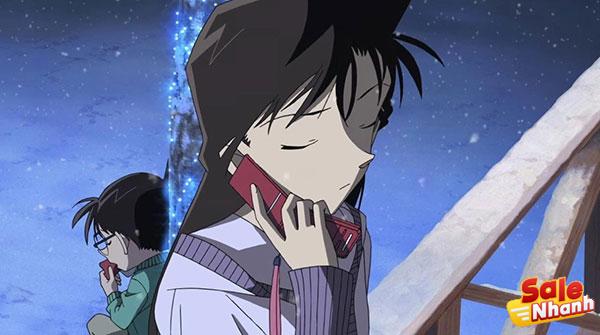 Conan did it alone with the help of sophisticated tools provided by Professor Agasa. There’s a feeling that adults won’t look like anyone else in Conan’s eyes if they stay like this? Well, even if it doesn’t make sense at times, the audience will still enjoy it. In the end, this is just a fantasy. 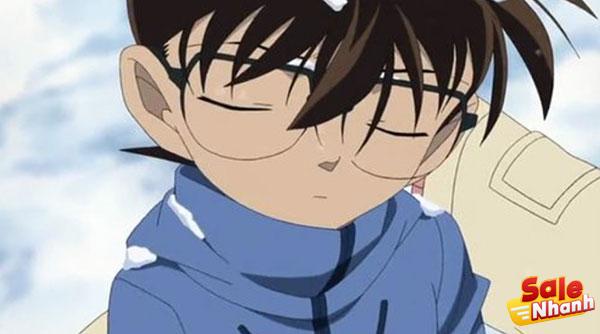 Here’s new knowledge for Detective Conan fans; If it turns out that if covered by snow, we only have a critical 15 minutes to survive. If it is more than 15 minutes, we have entered a dangerous phase and can lead to loss of life; like what happened to Conan when he was covered in snow.

This scene is one of the standout scenes in Detective Conan: Quarter of Silence. Everyone please help to find Conan, especially the beautiful Ran. We’ll be sad when everyone is confused to find Conan in the middle of a super heavy avalanche, even though we finally find him.

Detective Conan: Quarter of Silence , which runs at 109 minutes, is once again successful in entertaining fans. The total profit from the screening of this translucent film is $47 million! The advantage is more and more compared to the previous famous Detective Conan movies.