This movie is also a movie related to the existence of the Phantom Thief of Kid aka Kaito Kid which is longer than the previous films. The film grossed $31.4 million in profits from its screenings. 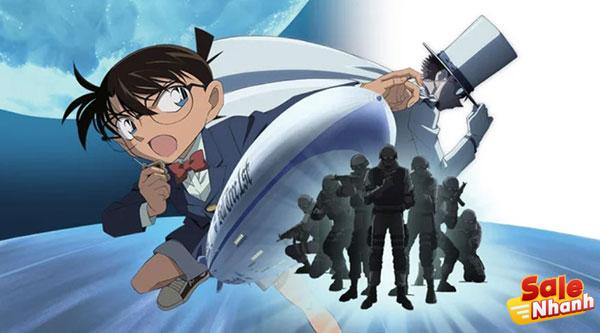 Detective Conan: The Lost Ship in the Sky tells the story of a grand theft plot by a terrorist group that hates the Suzuki Company.

Conan Summary: The Ship Disappears in the Blue Sky (Magician of The Silver Sky)

The film opens with the arrival of terrorist conspirators to a laboratory at the National Research Center in Japan. They stole some dangerous virus (biohazard) and blew up the lab. This gang calls itself the Red Siamese Cat Group and claims responsibility for it all.

This obviously made the Japanese people panic because there was news that the virus was carried by them and would spread throughout Japan within 7 days.

Not only the Japanese people were worried, but the police also began to quickly get involved, what they were confused about was that the Red Siamese Cat gang was destroyed 10 years ago, but why has it reappeared now?

At the same time, the financial advisor of the Suzuki family, Jirokichi Suzuki, will soon unveil his latest gem collection.

Not only wanting to show off to the public, Jirokichi also issued a letter challenging Kaito Kid through a letter that read: 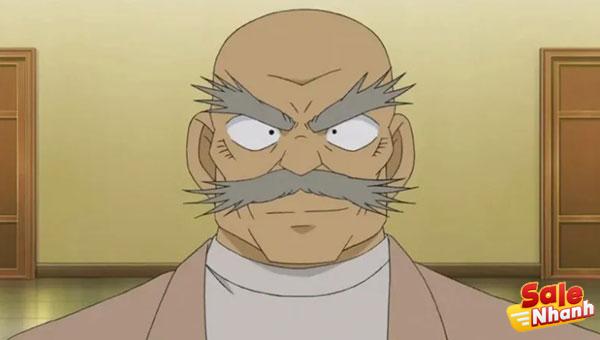 “The jewel you crave, Lady Sky, will be on display on the plane’s sky deck, ‘Bell Tree First’ on August 14, during its test flight. If you want to hold the great treasure in the palm of your hand, come between 13:00, our departure time from Tokyo, and 19:00, our scheduled arrival time in Osaka.”

Receiving the challenge, Kid automatically replies to him with a letter announcing that he will steal Lady Sky as the plane approaches Osaka.

Knowing this, Sonoko, who happens to have a crush on Kaito Kid, then invites Kogoro Mouri, Conan, Ran, the child detective, and Prof. Agasa to join them on the plane.

On the plane, in addition to the staff working and the police guarding Jirokichi’s jewelry, there were four other people working for the media.

The four are Takamichi Fujioka, a journalist; Masaki Mizukawa, a television director; Kasumi Nishitani, a reporter; and Junpei Ishimoto and a cameraman. They will be covering the helium plane as well as the Kaito Kid challenge. 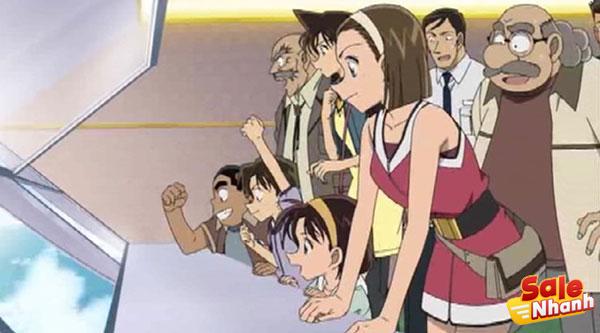 While they were all strolling around to discover the largest and most luxurious helium zeppelin under the management of Suzuki Airship Corporation, a maid relaxed in the smoking room to rest for a while before she served. guest. Unknowingly, under the sofa he was sitting on, there was a glass tube that was exposed to the virus.

While everyone was still enjoying the tour on the lower deck, Ran went back to the upper deck to look at the gem ring again, but as she was about to approach the platform, she met a waitress who had used ice. Ran’s medical that she donated when she was. got on the plane. 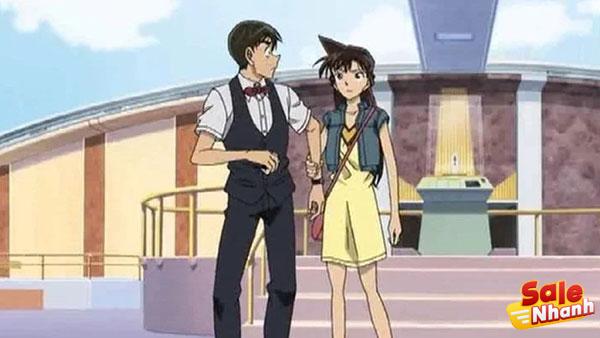 Ran quickly discovered that the servant was Kaito Kid, but Kaito Kid was disguised as Shinichi. This was clearly a mistake because Ran was wondering if Shinichi is the Kaito Kid who likes to steal.

Still wondering about Shinichi, Ran panicked because Jirokichi said that there was a virus leaked on the plane. Jirokichi received a call from the leader of the Red Siamese Cat. As a result, the whole plane panicked.

Moreover, not long after that, a pack of Red Siamese Cats came to hijack the plane. This prevented the plane from landing because the dangerous virus was spreading inside the zeppelin.

Things spiraled out of control when one of the passengers, Fujioka, started developing a red rash on his skin and difficulty breathing. Instead of running, he approached other passengers.

Luckily Ran was able to stop him. Fujioka was eventually taken to the staff room for isolation. Not stopping at Fujioka, now Kasumi is also infected with 1 staff. Upon learning the situation was getting worse, all gathered in one room and were guarded by the conspirators and the infected were brought into one room.

Before the whole thing happened, fortunately, the detectives peered into the fuselage so as not to detect its presence; and it happened when Conan was there with them.

This creates an opportunity for Conan to destroy the bomb set by the gang. Unfortunately, they were soon arrested and Conan was thrown from the plane. 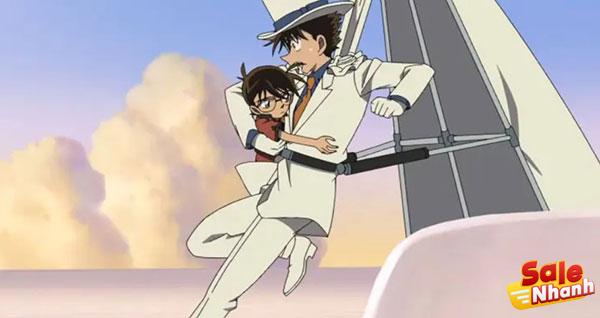 Kid, who disguised himself as one of the servants, immediately jumped to help Conan, and the two landed in a small town not far from Osaka.

Conan then calls Heiji, who is traveling with Kazuha and his distant cousin. Heiji said that Osaka is really messed up because the plane contains the virus.

After calling Heiji, Conan now uses Shinichi’s voice to ask Inspector Megure to come pick them up and take them back to the zeppelin plane. Luckily there was a Kaito Kid who looked like Shinichi, so when the detectives Miwako and Takagi came to pick them up, they didn’t suspect anything. They were brought back to the plane. 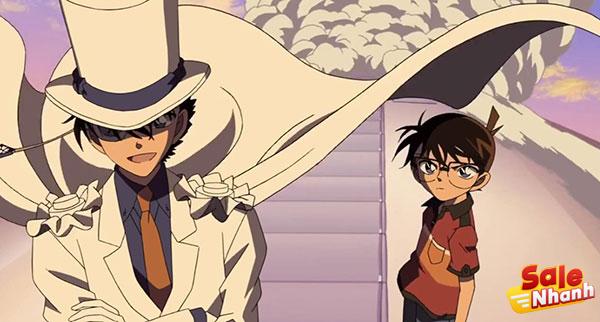 In the end Conan and Kaito Kid took action to help each other. With Conan’s guidance, Heiji, Kazuha, and their little cousin were able to catch another gang that was stealing Buddha statues from temples unguarded when Osaka and the surrounding areas were cleared. Evacuated by zeppelin aircraft. Finally, the red Siamese cat gang was caught and the film ended.

Aoyama Gosho, the author of Detective Conan, has teamed up with screenwriter Kazunari Koichi to continue to bring stories that are not boring in every movie they make. 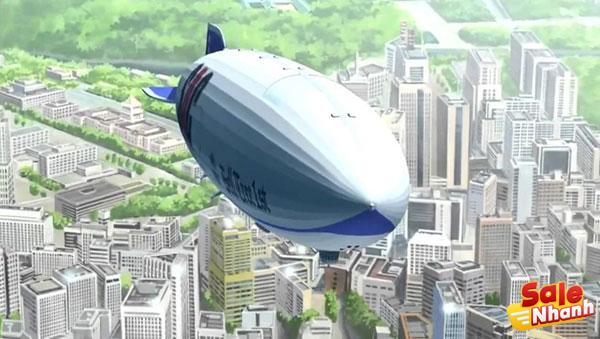 One of them is this movie. If before the settings were in high-rise buildings, super large game consoles, jet planes, now there are new ideas about the setting presented.

Unmodified, the setting of the famous Detective Conan this time is a helium zeppelin plane with huge size and super luxurious interior. This makes the audience satisfied because the staging is not boring from the first movie to the 14th movie. In the next movie, what setting did they choose?

The Suzuki family has appeared in the famous Detective Conan movies before; including Sonoko’s father and Sonoko herself. We now have a new member from the Suzuki family.

He is a financial advisor to the Suzuki family and the company called Jirokichi Suzuki. He is Sonoko’s father’s older brother, who makes him Sonoko’s Uncle.

Jirokichi is known to be a collector of many valuable objects from his inventions; starting from treasures or antiques that he bought from auctions. Money is not an issue for him as he is a Suzuki family.

Jirokichi is also very obsessed with catching Kaito Kid because he always gets what he wants but Kaito Kid, his hardest target.

Kaito Kid is back

The movie Detective Conan: The Lost Ship in the Sky really set the stage for the sly and handsome thief, Kaito Kid. Just imagine, from the start of this movie to its completion, Kaito Kid is one of the main characters along with Conan, Kogoro, Ran and the other child detectives. 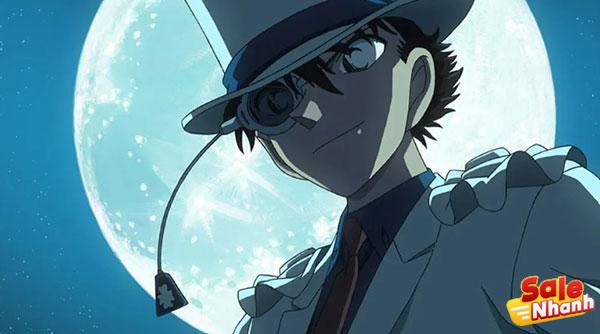 This is the second time Kaito Kid has appeared in a long time after the previous Detective Conan (Movie 8) movie titled Magician in The Silver Sky.

Kaito’s appearance will definitely continue to be present as his role is fun to watch. Not to mention the face like Shinichi makes the audience fall in love.

Overall, Detective Conan: The Lost Ship in The Sky this time deserves a lot of praise. In fact, this film was included in one of the nominations of the 2010 Japan Academy Awards for the Animation of the Year category.