Conan: Jolly Roger in the Deep Azure the adventure of Conan and the child detectives continues once again! After finishing the amusement park case in the previous movie, Conan now faces a new, more challenging and dangerous case on an island known for its extraordinary treasure that makes many people visit the island. . However, it turned out that some of the people who were keeping an eye on the treasure on the island were crazy about the treasure, so they became violent and caused trouble. Departing from that matter, Conan and his friends begin to be drawn back to exciting adventures. Can Conan and his friends get to the hidden treasure? Let’s review Salenhanh movie to find out the answer through the review below

The film begins with detectives Miwako and Takagi’s pursuit of runaway and action criminals on a car. Masked criminals Lupine and Fujiko. Miwako chases the gang to a harbor and manages to neutralize them.

Just before one of the culprits faints, he mentions Koumi and Jolly Roger’s island; confused Miwako and Takagi. The story finally continues to the present, when Kogoro, who just won the 300k yen lottery, invites Conan, Ran, the child detectives, Professor Agasa and Sonoko to go on vacation together on Koumi Island. This island is also the island mentioned by one of the perpetrators of the previous crime. Coincidence isn’t it?

Arriving at the hotel, the reservation named Kogoro did not exist which confused them, it turned out that the head of the tourism department who invited Kogoro to vacation had prepared a place closer to the beach.

As soon as they arrived at the inn, everyone began to live separately. Ran and Sonoko go diving, Detective Kid goes with Ai and Conan to find treasure, Professor Agasa and Kogoro relax.

The detectives began playing treasure hunt through the guidance of the head of the Tourism Office named Jouji Iwanaga.

Meanwhile, Ran and Sonoko are on their way to the sea to have their diving instructor named Kimiko Yamaguchi explain different things about the island. Yamaguchi said that many people visit the island because of a treasure hidden somewhere on Koumi Island. 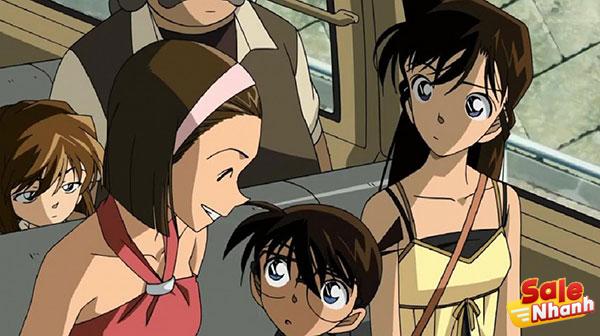 Once upon a time, the island was visited by a pair of female pirates named Anne Bonnie and Mary Read. According to reports, they hid the treasure they collected somewhere on Yoriya Island, a small island near Koumi Island.

But hundreds of years ago, the island sank due to the loss of the Methane Hydrate gas that supported the island.

This information also reached the ears of the Detective Boys, which made them excited to find treasures in the game they were participating in. While the detectives with Conan and Ai were searching for Ran’s treasure, Sonoko started diving with Yamaguchi. While at sea, they meet three people being attacked by sharks.

The three are treasure hunters named Tomoyoshi Tayama, Taro Izuyama, and Mitsushi Matsumoto. At that time Tayama was seriously injured, while Izuyama and Matsumoto tried to swim away from the sharks. Ran, Sonoko and Yamaguchi then returned to the boat and took the three to the hospital.

Arriving at the hospital, Tayama was unable to help. This leads to Izuyama and Matsumoto being questioned by the local police and inspectors Megure, Shiratori and Miwako as well as Takagi.

Kogoro also inquired about the accident but they were unable to inquire further about the incident because of the lack of evidence that it was not an accident.

On the other hand, Conan started not participating in the treasure hunt because he liked to listen to the cases experienced by treasure hunters. However, Ayumi, Genta and Mitsuhiko as well as Ai are still busy searching for the treasure. They almost gave up a few times but Conan was still able to help them for a while.

On the night when they returned to look for clues about the location of the last piece, Conan left the Detective Boys again, returning to Chika Mabuchi’s wetsuit shop to investigate the treasure hunt. But he was caught by Chika and left the shop. While returning home, the alarm at the Tourist Office rang loudly.

Conan immediately went to the Tourist Office; there he saw Izuyama and Matsumoto stealing. While scouting, gunfire rang out and injured both of them but they escaped.

When Kogoro and the rest of the police force arrive at the Tourist Office, they learn that a sword and gun left by pirates Anne Bonnie and Mary Read have been stolen from the office gallery.

Conan was still curious who shot the two robbers. When Conan gathers with Kogoro, the police, and Iwanaga; Conan knew one thing and understood who the shooter was. But he silently waited for the right time. The next day, Conan reunites with the detectives and the others.

They manage to finish the game and get a clue that the game actually tells where the treasure is hidden on the island. Clues point to a pirate flag named Jolly Roger, which belongs to Anne Bonnie and Mary Read. Izuyama and Matsumoto also knew the same thing.

Izuyaman and Matsumoto then went to the treasure house located in the palace under the sea. The palace is shaped like a giant temple on the island of Yoriya that sank 300 years ago.

They take Ran, Sonoko and Yamaguchi hostage. However, only Ran and Sonoko were brought into the sea and Yamaguchi was knocked unconscious, so he immediately informed everyone.

The reason Ran and Sonoko were brought in was for them to prey on the sharks. Just like they did before; but unfortunately an accident happened until the shark attacked Tayama to death.

Not to mention their bullet wounds still haven’t healed. The weak Sonoko was really distressed, first having her arm slashed until her blood agitated the shark which then released oxygen to her.

Luckily, Ran helped. The two eventually reach the treasure chest, which turns out to be a pirate ship. The two perpetrators were very angry and wanted to kill Ran and Sonoko but Conan paralyzed them. It turned out that Iwanaga had been following them all under the pretext of guarding the treasure.

Iwanaga also seems to have shot Izuyama and Matsumoto the day before. As the whole case was read, Ran, Sonoko, Conan and Iwanaga eventually saved themselves by getting on a boat in front of the cave where the boat sank.

Conan uses the explosive power of methane to destroy the temple so that the ship can rise to the surface.

Review of the movie Conan Movie 11: Mystery Under the Blue Sea

Not too attractive compared to other parts

It can be said that Detective Conan this time is not too big and complicated like the previous movies. Even cases are just theft and treasure hunting. The deaths that have occurred are also due to shark accidents that are not caused by humans. No wonder this movie feels a bit bland; not to mention the plot feels ordinary.

It’s no wonder that the 11th installment in the Detective Conan franchise has not been as profitable as the previous film. The 95-minute film grossed just $25.6 million, a 50% drop from the previous film, The Private Eyes’ Requiem.

In the movie Detective Conan: Jolly Roger in the Deep Azure, Professor Agasa introduced his new technology, a portable oxygen tank that can supply oxygen in just 10 minutes. Most likely this device was carried because they were on vacation at the time and in case someone was dragged by the waves and drowned.

This device was very useful, especially when Conan, Ran and Sonoko had to ‘sink’ for a while before the ship they were sailing out of the temple and came to the surface due to the large air cavity in the hull. transport.

Conan initially gave the device to Ran, but Ran used it on Conan.

You may be interested: Movie Conan: The Last Magician of the Century As we all know, Ran and Sonoko are best friends since childhood and they can also be called a real friend like the pirate couple Anne Bonnie and Mary Read. When they were caught by Izuyama and Matsumoto, Ran protected Sonoko and took care of her because Ran knew that Sonoko was weak and not as strong as she was.

Instead, when they were surrounded, it was Sonoko’s turn to protect Ran from Matsumoto’s attack as Ran took down Izuyama. Sonoko repelled Matsumoto with a Mary Read sword they had taken from the Tourist Office’s gallery. It’s great isn’t it? They both protect each other no matter what.