Movies with the premise of scary creatures that are super alien to us, it turns out that there are still many fans, right? Call it Godzilla, King Kong as big as a building, or sea creatures like Megalodon and Cthulhu in Underwater (2020). All these terrible creatures were successfully favored by the audience.

As it turned out in 2008, there was also an equally terrifying monster with the shape of a Clover that threatened the entire city of Manhattan and its surroundings. The film, titled Cloverfield, brings the monster from the deep sea into the land to attack all things and spread endless terror. Everything is recorded on the main character’s camera.

The film begins with a documentary evidence released by the US Department of Defense in the Central Park area. The video is from the camera of a man named Robert Hawkins (Michael Stahl-David). The recorded data shows the time and date of all the horrifying events that occurred.

The first shots are dramatic as Rob wakes up from a deep sleep in the luxurious apartment owned by his girlfriend Elizabeth McIntyre (Odette Yustman) in Columbus Circle. In addition to the footage, there are other footage showing the two couples dating in New York and Coney Island.

The recording was eventually cut and moved to another recording. The footage was taken by Rob’s best friend Hudson Platt (TJ Miller) as he and all of Rob’s friends prepare to throw a surprise farewell party for Rob. The man is about to move from New York to Japan because of the promotion he received. 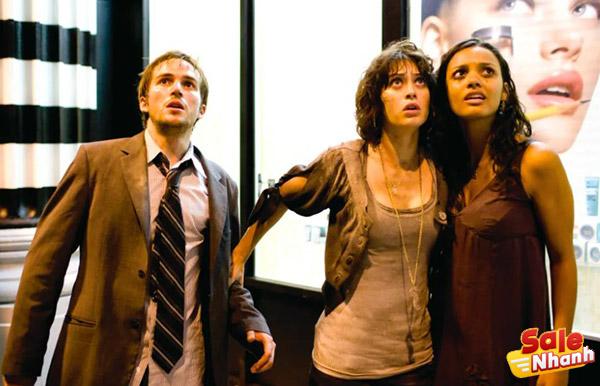 Also present at the party are Rob’s younger brother, Jason (Mike Vogel) along with his girlfriend Lily (Jessica Lucas) and Rob’s other friend, Marlena (Lizzy Caplan). The party is so lively that Elizabeth joins the other men, making the group awkward because Rob argues with Beth so Beth leaves.

Soon after Beth left, Jason and Hud tried to comfort Rob. But while they were talking, a great tremor occurred that extinguished the entire city. After the power was restored, people gathered in the living room to listen to the latest news about the earthquake. The report even highlighted a capsized oil tanker.

Not knowing what the situation was, everyone finally went up to the attic of the apartment to see what was really going on. Before he could look around, a huge explosion from a skyscraper occurred throwing debris at Rob’s apartment. Everyone on the roof then ran downstairs.

People were now gathered outside the building along with thousands of people who were equally bewildered about what had happened. Not long after, the head of the Statue of Liberty flew and fell right in front of Rob’s apartment, accompanied by the collapse of the Woolworth Building, sending debris flying.

Breaking through the rubble, Jason, Rob, Lily and Hud along with the other survivors entered the store. After feeling safe, they came out to find all areas covered in dust and damage. Marlena is seen walking alone and says she has seen monsters and cannibals alive.

Lily, Jason and Rob think that Marlena is shocked, but Hud confirms it because he recorded the incident and a large mysterious figure is scratching at the collapsed part of the building. A large-scale evacuation was immediately conducted by the local government. Everyone in Manhattan will be temporarily evacuated to Brooklyn.

Thousands of people flocked to Brooklyn to walk across the Brooklyn Suspension Bridge. Many people took pictures of the Statue of Liberty packing the barrel, the overturned oil tanker and the situation on the bridge. Jason is separated from the group as soon as the sea monster reappears and crashes into the bridge.

The incident killed Jason and sent Lily into a frenzy. They ran to safety while the 42nd Infantry Division of the National Guard attacked the monster. Unfortunately, even smaller parasites fell from the monster’s body attacking those around him.

Things didn’t get any better, when they were about to be assessed by the military, when Rob received a text from Elizabeth informing her that Elizabeth was trapped in her apartment and unable to move. Rob immediately went to the apartment, while the others accompanied Rob. They ran and ventured into Midtown Manhattan.

Bad luck seems to follow Rob’s entourage. While walking leisurely, they were caught in the middle of a war between the army and monstrous monsters. They are then forced to hide in the subway station and have to fight a small parasite from the damn monster that kills Marlena.

Ignoring safety protocols, Rob and the others continue their journey to save Beth. The captain then tells them that they have to get out of Manhattan because the “Hammer Down Protocol” operation to burn Manhattan is imminent.

Taking advantage of the limited time, Rob, Lily & Hud finally reach Elizabeth’s apartment, which collapsed and fell into the building next door. They eventually helped Elizabeth, who was hit by the concrete, and got her out of the building before the operation started. They arrived on time at the evacuation area.

The operation has begun and explosions everywhere trap Rob and Elizabeth. They hid under the bridge in Central Park. They give a final video message, forgive each other and say love again before dying and the video freezes.

The film finally ends with the conclusion of Rob and Beth’s journey to Coney Island on the Ferris wheel. They didn’t realize that behind them was a vague foreign object that had fallen from the sky into the sea, which was probably why the clover monster appeared. In the ending credits, you hear a groan saying “It’s still alive…”.

POV is quite annoying

If you are dizzy or have vision problems, then you will not be able or unfit to watch this movie, this is because the whole plot is shown using point-of-view (POV) technique. Many people will not feel comfortable watching because they will be dizzy.

But this is one of the best tricks to make the movie seem real. In addition to being real people, we will feel that we are also in the movie. One of the scariest scenes is when the dark mode camera is activated and the parasites appear scattered and chase them from behind.

The screenwriter, Drew Goddard, is very good at making movies with the premise that monsters are no longer boring when watching previous monster movies have popped up and stolen the stage. Thanks to the cool hands of director Matt Reeves, this movie also looks good to take home 5 awards at once!

The acting of the actors and actresses in this movie is also very good! In particular, the character played by Michael Stahl-David is Rob. Through the scenes in the movie, we can see fear, anxiety, despair and all sorts of terrible things through their faces and even their eyes!

Another movie about clover

What exactly is Cloverfield? Why are there so many other movies that use the word Cloverfield as a title, such as 10 Cloverfield Lane (2016) and The Cloverfield Paradox (2018). Are the two movies related to the movie Cloverfield (2008)? The answer turned out to be yes! All three are related.

10 Cloverfield Lane (2016) is about 8 years after the disaster in New York, with a different story; about the struggle for life. While his film Cloverfield Paradox (2018) tells about the mistake of a group of scientists at the Cloverfield space station referring to the fall of a strange object in the movie Cloverfield (2008).

The 85-minute film, a hit with a gross of $172.5 million, deserves good reviews. In addition to winning many awards, this Cloverfield movie also took the number one spot in the box office chart for a week in Japan. So a score of 4/5 is a reasonable number.