Fall is the time that anime lovers have been waiting for. The reason is, this fall will have some of the latest anime titles released, whether it’s an anime that just premiered or a continuation of the previous season or episode.

The number of anime titles airing this fall is said to be a lot. So, for those who are looking forward to when the fall begins, let’s first take a look at some of the latest anime titles that will be airing. Salenhanh has compiled fall anime titles just for you, you know. This anime has a gore theme, so it is not recommended for those of you who don’t like violent themes and gore scenes. Chainsaw Man is adapted from the manga series by Tatsuki Fujimoto titled Chensō Man.

Chainsaw Man tells the story of a man named Denji. He is a poor young man who made a pact with a dog demon named Pochita. Later, Denji has the ability to turn parts of his body into a chainsaw.

Later, Denji joined a government agency known as the Demon Hunter Security Bureau. This academy focuses on the fight against the demons that threaten the world. And Denji won’t stop until he can achieve his simple dream. For those who have been following the Mob Psycho 100 anime since the first season, the third season of this anime will finally be broadcast in October 2022. The third anime season is still being worked on by studio Bones and Directed by Tachikawa Yuzuru.

This anime continues the story of Kageyama Shigeo aka Mob. Although his appearance is normal, he has very strong magic power. Will there be peaceful days for Mob in this 3rd season? Izuku Midoriya aka Deku and other Hero friends will engage in a great battle. The massive battle involved between the Heroes against the occult Liberation group.

Can’t you wait to see Deku and other heroes fight in action? Let’s wait for its launch on October 1, 2022. In the fall of 2022, quite a few anime will continue the story of previous seasons. One of them is the X-family anime that fans have been waiting for.

Back to focus on the quirky story of the Forger family, including Loid Forger, Yor and his adorable child, Anya. Will in the second half of this Loid or Twilight be able to successfully complete the task? Then what will be the story of the next ‘Forger family’? After a long wait, the anime Bleach : Sennen Kessen-henatau Bleach: Thousand-Year Blood War is finally released in October 2022. This anime adapts the final manga arc of the same name from the 55th volume. to episode 74.

The story once again continues the story of Kurosaki Ichigo, who has the power of a shinigami (god of death). When Ichigo lives in Karakura City, new shinigami and enemies appear. A great war in the Soul Society is about to break out, possibly even leading to the destruction of the Soul Society.

The fate that the god of death carried for thousands of years, and the hidden truth, will finally be revealed. The final battle is about to begin.

The next anime that follows the previous story is Fumetsu no Anata e Season 2. This anime is also known as To Your Eternity Season 2.

The story once again continues the story of a young man named Fushi who is immortal. This time, Fushi has to face his arch nemesis, Nokker. Fushi, who wants to live and survive alone, returns to fight to protect the future from Nokker attacks.

Uzaki-chan Wants to Hang Out! Double In the second season, this anime once again tells the story of Uzaki Hana and Sakurai Shinichi. During summer vacation, Shinichi doesn’t feel bored for some reason.

There are many festivals in the fall and winter. This time, not only Uzaki but his whole family also joined Shinichi and Uzaki. They watched and played together, while noticing a slight change from Shinichi and Uzaki, who were ‘just seniors and juniors’. This is followed by the Blue Lock anime, a sports-themed anime that will air in the fall of 2022. Adapted from the manga of the same name, this anime tells the story of a Japanese football club after FIFA World Cup.

Jinpachi Ego created a system called ‘Blue Lock’. An establishment that serves talented strikers from different high schools in Japan to see what they are capable of. One of many high school students who, after being isolated, will become a striker for the national football team.

It’s Yoichi Isagi, a striker from a high school who feels like a failure because he can’t invite his teammates to the national tournament. Using the ‘Blue Lock’ project, he aims to pursue his dream, which is to become the greatest striker in Japan.

The Eminence in Shadow

Next up is The Eminence in Shadow fantasy-themed from studio Nexus. This anime tells the story of a great hero and a great villain. It was Kagenou Cid, who was reincarnated into the wizarding world. He wanted to show the true superiority of a ‘shadow’.

Cid pretends to be an ordinary bandit and recruits members to join the ‘Garden of Darkness’ organization. His goal is to take down the mysterious cult lurking in the shadows. Using a lot of improvisation, Cid leads his fake organization against the corrupt Diabolos Cult. 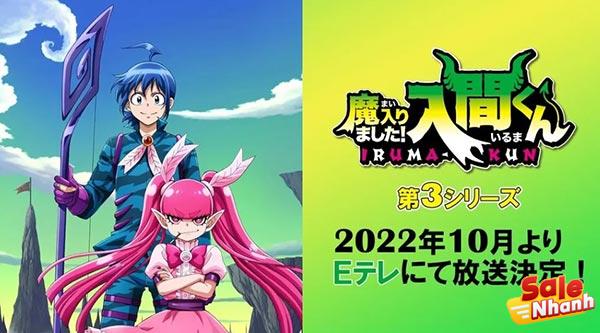 The next anime is Welcome to Demon School! Iruma-kun Part 3 . This anime continues the story of Suzuki Iruma, who is the ‘nephew’ of the great demon named Sullivan. He started attending a school for demons, where his ‘grandfather’ became a stronghold.

Iruma manages to make friends as well as climb the yōkai rank and grow to succeed in her new environment. However, Iruma faces a new challenge that awaits him, a test this season.

The students had to perform the test by wading through a large and very dangerous forest. They also have to compete for food, so even classmates can become rivals. There was a battle of strength and wits to survive there. KanColle: Itsuka Ano Umi de is the sequel to the Kantai Collection: KanClolle anime that will premiere in November 2022. This anime follows the story of Akagi and Shigure, two girls engaged in a war.

If in the first season, Fubuki becomes the main character. In this season 2, Shigure will be the main focus of the story. In this second season, Shigure and the other girls have to participate in the fierce ocean battle.

But, apart from the fight under the ocean, this second season will discuss more about the girls in this anime. This anime has romantic comedy and sci-fi genres. The anime tells the story of a depraved young man named Ataru Moroboshi. He had great bad luck.

Once upon a time, the earth was threatened by invaders called Oni. Ataru was then chosen as the human representative to fight one of these invaders. Instead of feeling unlucky, Ataru actually felt it was luck.

Ataru must fight alongside Lum, the daughter of the invader’s leader. Ataru feels lucky to be able to win against Lum. Before long, however, misfortune struck Ataru again.

A misfortune involves Ataru, Lum and his girlfriend, Shinobu Miyake. Can Ataru balance their relationship? Golden Kamuy Season 4 is the sequel to the Golden Kamuy anime series. Recounting the main players, Sugimoto Saichi and Asirpayang go on an adventure to uncover a mystery and gold.

Sugimoto Saichi and Asirpa have renewed their contracts, although the situation has not changed. The two of them travel together in search of gold.

They also had to go through a stressful event. How will the struggle of Sugimoto Saichi and Asirpa be this time?

Reincarnated as a Sword Reincarnated as a Sword is a fantasy anime that will air in autumn 2022. This anime tells the story of the reincarnation of a character known as ‘Shishou’ into a sword. However, Shishou is no ordinary sword and he begins a quest in the middle of the forest.

Once, Shishou met an injured girl. After that, Shishou and the girl later known as Fran, work together to become a formidable team. Then they set out on a mission to deliver justice to the oppressed.

This anime follows the story of a young man named Sakuraba Ittoki. One day, Ittoki, an ordinary boy, discovers that he is the 19th heir to the Iga ninja clan.

Ittoki later studied to become a ninja of the Iga clan. He joins his clan to fight the Kouga clan that once attacked him. However, in everyday life, Ittoki tries to hide his true identity. This anime is a sequel to Peter Grill and the Philosopher’s Time. Return to continue the story of Peter Grill, who won a martial arts tournament and earned the title of the strongest man in the world. Just when he thought he might marry his fiancé, Luveria, he was constantly captivated by women of different races.

Although Peter’s strength is the strongest, he has the weakest will. Once, the news came that there was a terrible goblin and it became a disaster. Peter runs to stop him, but an unexpected encounter awaits on the battlefield. In the fall of 2022, besides being busy with action and fantasy anime series, there are also comedy and Slice of Life anime series like Do It Yourself !!.

They struggle, fail, but never give up until the project is over. This anime depicts the life story of high school girls who are taking steps towards the future.

I’m the Villainess, So I’m Taming the Final Boss

This anime belongs to Shoujo anime that tells the story of a girl named Dautriche Irene Lauren and a man named Jeanne Elmir Claude. The story begins when a young girl becomes seriously ill after a day of playing otome games.

Once, the girl found herself in the middle of a scene in one of the games being played and played a villain.

During a party to celebrate the end of winter, Crown Prince Cedric Jeanne Elmeier broke off his engagement to Irene. Then says that he is in love with Lilia Rainworth.

Aware of her tragic future, the girl decides to conquer the final boss in the game, ‘Demon King’ and Cedric’s half-brother, Claude Jeanne Elmier has made her fall in love. As time goes by, will Irene be able to successfully carry out her plan?

Raven of the Inner Palace This anime is the only series with a fantasy history theme in the fall of 2022. The story follows the story of a queen living in the palace. However, the queen did not serve the emperor, although her position became known as the Raven Consort.

The current emperor, trying to meet the empress. However, he does not know that their meeting and fate will become taboo and possibly reverse history. In Japanese, the anime is known as Yuusha Party wo Tsuihou sareta Beast Tamer, Saikyoushu no Nekomimi Shoujo to Deau. This anime tells the story of an animal tamer who is now living in freedom. And the tamer begins to find a close friend in his life.

It’s Rein, he is an animal tamer who is a member of the hero group that uses animals. But, with no other possibility, Rein couldn’t watch the battle.

As a result, Rein was expelled from the group and is currently living freely as an adventurer. In the middle of his adventure, Rein meets a girl from the strongest cat tribe. While elsewhere, the heroes fail to realize that their success is due to Rein.

Although there is no autumn in Vietnam, at least you can still watch the anime airing this fall. This year’s fall anime will start airing in October. So don’t miss watching the anime you’ve been waiting for, OK!