So far, Korean young actor Yeo Jin Goo has acted in 14 movies and 22 dramas. He is nicknamed ‘Nation’s little brother’ because he debuted at a very young age.

Yeo Jin Goo started his acting career through the 2005 movie Sad Movie. Then, he returned to star in the historical drama A Frozen Flower in 2008 and Giant two years later. His name as an actor skyrocketed when he participated in the drama The Moon Embracing the Sun in 2012. 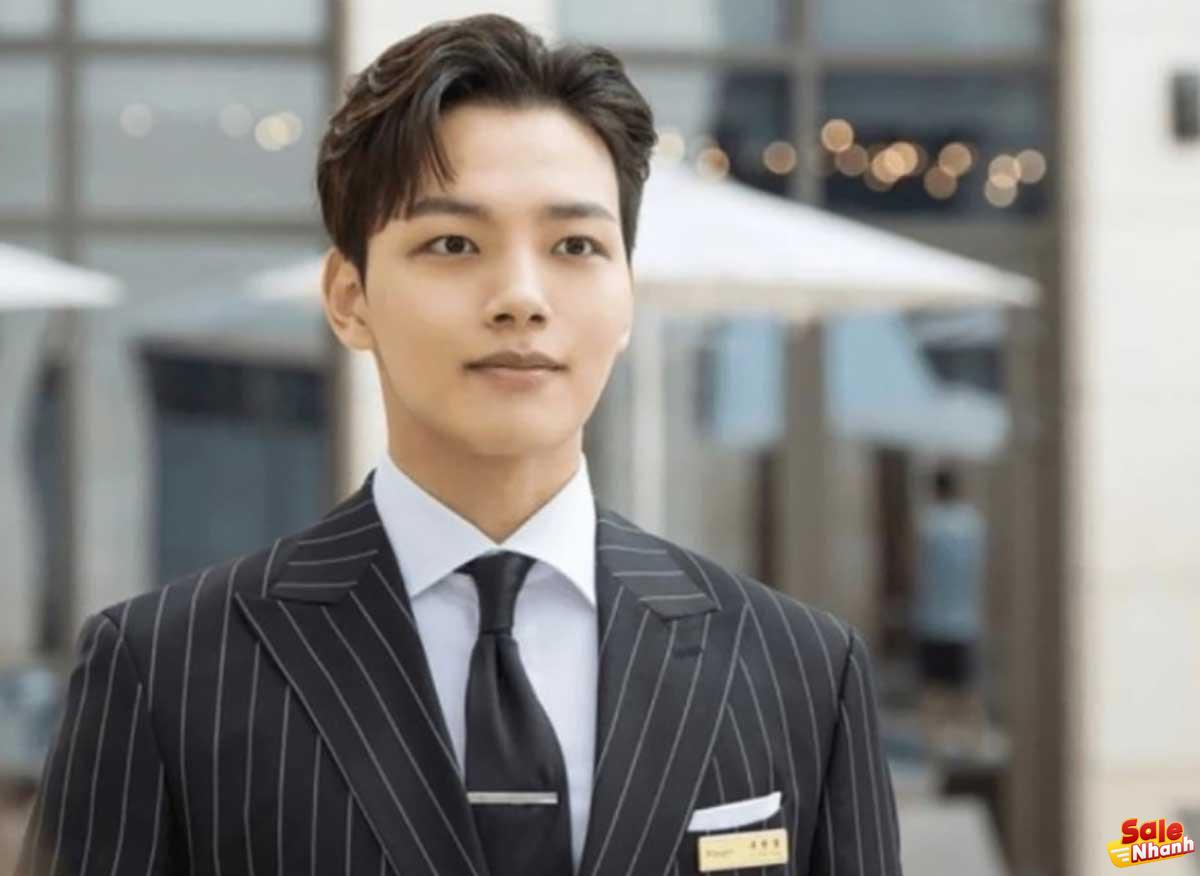 The guy featured in K. Will’s MV “I Need You” really has a lot of fans. Are you one of them? Salenhanh.com has compiled some of the movies with the participation of Yeo Jin Goo for you to most easily follow.

It is known that there is a heinous murder in the city which is similar to the serial murder case that happened 20 years ago.

The two of them work together to find the culprit of this brutal murder. In fact, in an effort to catch the culprit, both Dong Sik and Jo Woon did not hesitate to break the law.

The investigation continued, and the longer they studied the case, the more they began to worry that their actions might contribute to being part of the case. Horror movie fans should not miss this movie.

Hotel Del Luna is a drama broadcast on tvN with horror, comedy, romance and fantasy genres. Tells the story of Jang Man Wol, a CEO of a hotel located in downtown Seoul called Hotel Del Luna. This character is played by Lee Ji Eun aka IU.

So Jang Man Wol was trapped in his hotel for 1,300 years! All because he regularly makes the same mistakes over and over again over the years.

One day, the youngest assistant manager of a famous multinational hotel company is hired at the hotel as a manager. That is Goo Chan Sung played by Yeo Jin Goo.

Psst, Hotel Del Luna is an ancient hotel known to have many mysterious cases! And, after Goo Chan Sung walks in there, he eventually discovers that the hotel’s customers are not humans but ghosts.

Because, it turns out that Hotel Del Luna is really the resting place of ghosts. The drama that holds the number one spot for 5 consecutive weeks also features IU, Shin Jung Keun, Bae Hae Seon, Pyo Ji Hoon and Kang Mi Na.

This movie with a unique plot tells about life in 2017 and in the future, specifically 2037. It is said that the earth will be split in two.

The first is the ‘Smart Earth’, which contains humans who can control their emotions, even eliminate crime and disease, and contain all kinds of advanced technology.

While the second is the ‘Common Earth’ consisting of humans, on the contrary, where many law violations are rampant, the murder cases persist until they suffer from disease outbreaks. incurable.

Yeo Jin Goo plays Kim Woo Jin, a student majoring in neuroscience at Handam University of Science and Technology. He encounters a murder case at his university that he finds strange. In addition, the case is related to the twins and also his father.

The film is a remake of the movie titled “Masquerade” released in 2012, set in the Joseon Dynasty. Elevate the story as the kingdom is filled with turmoil and power struggles. Yeo Jin Goo as Yi Heon, a king of Joseon

One day, King Yi Heon named a clown who looked exactly like him named Ha Seon. Ha Seon’s purpose in the kingdom is to temporarily take his place as a form of effort to protect his true identity as a king who is being targeted by enemy assassinations.

Although very similar, the two have opposite personalities. Raya Yi Seon is known to have bad manners, while Ha Seon is a kind person who can even make changes in the kingdom so that Queen Yoo So Woon falls in love with him.

The Moon Embracing the Sun

This historical and fantasy drama is based on the novel of the same name by Jung Eun Gwol. The drama version of “The Moon Embracing the Sun” has successfully surpassed the rating of 42.2% to gain the title of ‘National Drama’.

This film was also the peak of Yeo Jin Goo’s success, helping him become the big actor he is today at a young age.

Elevate the story of Heo Yeon Woo, who is only thirteen years old but has been chosen as the crown princess of Joseon. One day, the Empress Dowager of the kingdom intends to secretly kill Heo Yeon Woo with magic. His evil intentions failed because Heo Yeon Woo escaped.

Even so, the princess died because she didn’t exist. This news is believed by the man who will marry her, namely Crown Prince Lee Hwon.

Meanwhile, Heo Yeon Woo, who escaped the assassination attempt, ends up suffering from amnesia. Although there is information that he has passed away, there are still many people who sincerely love him and have never forgotten the figure of Heo Yeon Woo.

Eight years have passed, and Heo Yeon Woo returns to the kingdom. At that time, Crown Prince Lee Hwon became the king of Joseon, where he should have been the queen of Joseon.

Heo Yeon Woo also made an effort to reclaim his position. In the drama, Yeo Jin Goo plays Lee Hwon when he is young, then Kim Soo Hyun as an adult.

Thanks to his role in this drama, Yeo Jin Goo won the Best Child Actor award at the 2012 MBC Drama Awards. Meanwhile, the drama starring Han Ga In won the Drama Award. the best.

Gye Hoon was surprised because since his sister disappeared 18 years ago, he has never felt the same way again.

However, with Da Hyun, the strange feeling returned. Gye Hoon and his family have lost a lot because of what happened to their younger brother. Since then, the father rarely comes home because he wanders around looking for his daughter. Gye Hoon’s mother also suffered from depression.

The young man then decided to return to his hometown. Who would have thought that he actually found so many bright spots.

He is a former slave turned royal bodyguard and detective of King Sejong. Ddol Bok had a very painful childhood when he witnessed his mentally disabled father being arrested and beaten to death in front of his childhood friend So Yi. Since then he vowed to take revenge on King Sejong.

One day, a blind fortune teller looked into Lee Won Ho’s house and said that he had seen a person as bright as the sun who would be loved by everyone.

The king, who didn’t want to be a rival, later killed Lee Won Ho. Little girl Lee Gyeom was lucky to survive the tragic incident. He was later adopted by a thief who decided to quit his job.

In 2010, Yeo Jin Goo was also the teenage version of actor Lee Beom Soo with his role in the drama called Giant (2010). His character’s name is Lee Kang Moo. He is one of three children whose father was killed by Hwang Tae Seob and Jo Pil Yeon, and his mother died in an accident.

Yeo Jin Goo and Ji Chang Wook turned out to be in a drama project. They both play the same character, named Baek Dong Soo. The difference is, Yeo Jin Goo plays the teenage version of Baek Dong Soo.

Dong Soo is a swordsman with a pleasant personality. He changed the nation’s destiny as a member of the royal guard.

Politics in the Josen Kingdom are heating up due to a feud between King Jeongjo of Joseon and a Qing emissary led by a swordsman from Japan and the assassination guild Heuksa Chorong. Baek Dong Soo went down as a legend who created martial arts in Joseon. Thanks to him, the king’s enemies can be defeated.

He is the son of Han Tae Joon. He meets Lee Soo Yeon and becomes friends. That day, when the two made an appointment to meet Soo Yeon, they found Jung Woo kidnapped again.

Fourteen years have passed, and Jung Woo has grown up to be a detective. He meets Zoey Lou, who reminds him of Soo Yeon. He also meets Harry Blossom, Zoey’s current boyfriend.

As a detective, Jung Woo knows that Soo Yeon is still alive. The father faked the girl’s death. Is Zoey really Soo Yeon?

The drama also known as “Daebak” tells the story of a prince named Yeong Soo played by Yeo Jin Goo. He is said to have been born as a nobleman, but lived as a farmer.

Until one day, Prince Yeong Soo meets Dae Gil, who challenges him to gamble. Thanks to his role in the drama, Yeo Jin Goo won the Best Actor award at the 2016 SBS Drama Awards.

This drama is about Sung Hae Sung, played by Yeo Jin Goo, a high school student who dies after being hit by a car on his birthday. In fact, Jung Jung Woon as his best friend prepared a surprise for him.

Time travel to 12 years after Sung Hae Sung’s death, when his younger brother was an adult. Sung Hae Sung suddenly appeared on the roof of his school. This happened because a shooting star fell to earth on the day he died.

My Absolute Boyfriend released in 2019 is about Um Da Da, a special makeup artist who has never had any luck in love. One day, Um Da Da finds Yeo Jin Goo, who plays a humanoid robot named Zero Nine. By chance, the two kiss, leading to Zero Nine’s cyborg coming to life.

Later, Um Da Da also changed Zero Nine’s name to Young Goo in the hope that he could become her perfect lover. And indeed, Young Goo has been quite successful in making women’s lives more colorful since his presence. Robot Young Goo and human Um Da Da fall in love.

The drama is based on the popular webtoon of the same name, broadcast on KBS2. This is the first drama Yeo Jin Goo takes on the lead role.

Because of Jung Jae Min’s stork body, Baek Ma Ri almost sucked Jung Jae Min’s blood when biting his neck, when they were both sitting on the train. (Baek Ma Ri is sleeping so she doesn’t know).

That awkward first meeting actually brought the two closer together. Jung Jae Min, who initially hated vampires, eventually fell in love. But, it was because he didn’t know Baek Ma Ri was a vampire.

Baek Ma Ri continued to hide her true identity for fear of being shunned by people, especially Jung Jae Min. The character Baek Ma Ri is played by Seolhyun AOA, you know!

Starting her acting career in 2005, it is not surprising that Yeo Jin Goo now possesses excellent acting talent through many roles in a number of dramas. So, which movie do you prefer to see Yeo Jin Goo in?