Offline game is one of the game genres that are loved by many people, especially for busy people who do not have much time to play online games, but still have the most enjoyable relaxing hours. .

If you are looking for the best offline game for PC, here are the best choices for you that Salenhanh has compiled. 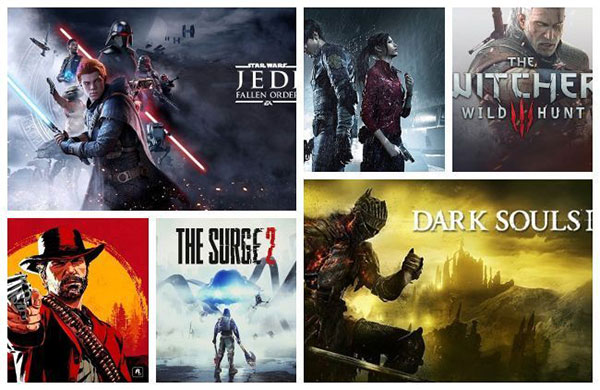 The Valve is known for creating instant classics like Counter-Strike: Global, Left 4 Dead, Team Fortress, and Half-Life 2. Portal is one of the few Valve Corporation games that is single-player. Although Portal 2 has online co-op, the story is more engaging in Portal First. The game is very polished and enjoyable from start to finish. The goal is to solve a series of puzzles while being directed by GLaDOS, an advanced AI. Even though Portal released in 2007, the game feels like it hasn’t aged a day.

Developer FromSoftware has proven for the third time in a row that they know how to make action-adventure RPGs. Sure, there have been spinoffs like Bloodborne and Sekiro: Shadows Die Twice, but those wouldn’t exist if it weren’t for Dark Souls. Dark Souls II I is slightly faster paced than previous versions. The boss fights, however, are also tiresome and unforgiving. Dark Souls III is recommended for experienced gamers because of its difficulty level. However, for those willing to crush it, Dark Souls III can be outrageously entertaining.

Doom (2016) is arguably the best attempt at reimagining the Doom franchise. Fast paced combat combined with brutal killing is a best first person shooter game. Single-player campaigns can be the highlight of Doom. The game is set on the planet Mars, so amazing.

Now that Doom Eternal, the sequel to Doom, is on track for release, we couldn’t be more ecstatic. “We learned that there will be five playable demons: Revenant, Pain Elemental, Mancubus, Arch-vile and Marauder. There are six maps released, but more maps and demons will be added later on.”

Packaged neatly in one collection is a trio of BioShock remastered and primed to play. The BioShock franchise is considered one of the biggest in gaming. Its refined gameplay mechanics combine with its twisted story and make it a must-play offline PC game. With villains like Andrew Ryan in the original BioShock and Zachary Hale Comstock in BioShock Infinite, there are plenty of themes to keep players hooked.

This overlooked gem is a roguelike-metroidvania that is in some ways comparable to the Dark Souls series. Players will have to fight ferocious enemies while avoiding the game’s obstacles. Falling into a pit of thorns can be frustrating, which is why not everyone will appreciate Dead Cells. Before you play Dead Cell, it’s worth noting that the game is very unforgiving. Dying in the game forces you to start over.

The Witcher 3: Wild Hunt’s expansive world gives us pause. We can’t help but be overwhelmed by the scale of the world beyond the main story. This is a game that you can log for hundreds of hours without losing its quality. The diverse enemies, weapons and towns make the game a masterpiece. As an offline game, what it does it’s perfect. No need to be online as it will just take away from the game. If you’ve only played one role-playing game this year, The Witcher 3: Wild Hunt is a solid choice.

From the same developer, Gate of the ururur comes Divine: Original Sin II. At first glance, Divinity: Original Sin II comes after games like Diablo 3, however it’s more than just a loot-based game. Divinity: Original Sin II cleverly combines RPG elements that blend well with turn-based tactics. The scale of the game is huge. The dialogue is engaging and most players can find something to appreciate in the game. Using the controller is easy and simple with this offline PC game.

One notable change to Civilization VI is a religion condition that allows you to win the game by converting the world to your religion. As a turn-based real-time strategy game, Civilization VI has very little competition. Elevating a civilization from feudalism to the modern era is just too much fun in Civilization VI. The game can be played offline for competitive matches against intelligent AI. Civilization VI has relatively low requirements compared to other top PC games. This is a game you cannot miss!

Bloodstained: Rite of the Night

Bloodstained – Ritual of the Night is a premier single player PC game developed by ArtPlay and published by 505 Games. You can also play this PC game offline on PS4, Xbox One, and Nintendo Switch. It is a side action RPG designed using Unreal Engine 4 and released in 2019 for all platforms.

A Plague Tale – Innocence is a single-player game from developer Asobo Studio and publisher Focus Home Interactive for PC, PS4, and Xbox One. Released in 2019 for all the aforementioned platforms, the game is playable through third person.

This game has a series of puzzles that the player needs to solve as a way to scare away the hungry rats and direct them towards the enemy. The main character has a hook to throw stones, beautiful guards and kill them. The game also blends stealth and horror and challenges the player to survive any great danger.

The Outer Worlds is a single-player game developed by Obsidian Entertainment and published by Private Division. Released in 2019, gamers can play the first-person action role-playing video game on PC, PS4, Xbox One, and Nintendo Switch.

These offline PC games allow the player to create his character and unlock a ship that serves as the central space for the game. Along with a wide range of weapons, players can recruit other non-player characters with their quests and stories.

Devil May Cry 5 is one of the best PC games developed and released by Capcom in 2019. Gamers can also enjoy playing single player games on PS4 and Xbox One. The action-adventure, hack and slash game contains a lot of characters and has a very impressive presentation.

In addition to featuring Dante, the main character, the game also features a new protagonist called V. There are also many other playable characters with unique power sets and combo styles. The game features different visual layouts, face animations, and monster designs to improve the player’s gameplay experience.

Resident Evil 2 is still the best survival horror series on PC. Also developed and released by Capcom in 2019, gamers can enjoy playing it on PS4 and Xbox One.

The game has extra characters and gamers can enjoy the full RE2 experience of the game. With great graphics, players can experience the full horror of visiting zombie-infested areas like Raccoon City.

Surge 2 is a sci-fi game with difficulty and combat similar to the Dark Souls franchise. Developed by Deck13 Interactive and published by Focus Home Interactive in 2019, the action role-playing game allows players to customize character appearance and gender.

Moreover, there are many weapons and collectibles that players can use to upgrade their characters. The game also features various non-playable characters that affect the game’s plot.