Along with the latest generation of foldable smartphones, Samsung also introduced a number of wearables that match the new flagship. One of them is the Galaxy Buds 2 Pro, the successor to the previous Pro variant, which is now even more professional.

That’s right, when the Galaxy Buds 2 was launched a while ago, Samsung emphasized that the TWS headphones are not a successor to the first Galaxy Buds Pro but a replacement for the Galaxy Buds +. However, not a few people actually choose this affordable option, because the design is designed (and proven) to be much more comfortable.

It is possible that on this basis, Samsung launches the Galaxy Buds 2 Pro with a very similar design and improved features in it, both software and hardware. Turning it into a TWS headset can provide a complete package, not only with sound quality but also with smart ANC. Here is the review.

Both the design of the charging case and the headphones of the Galaxy Buds 2 Pro are designed almost exactly like the non-Pro variant. The most notable difference is the presence of black accents on the surface of the Galaxy Buds 2 Pro’s earpiece – possibly an additional sensor to enable some extra features. The color options are also similar, namely Bora Purple, White and Graphite which I am reviewing this time.

With a matte surface material, both the case and the headset can “reduce” the appearance of fingerprints. Since it’s a bit rough, it’s going to be a bit difficult to get the Galaxy Buds 2 Pro case into your pocket—just like a smartphone uses a soft silicone case. The case is relatively small with a boxy design. 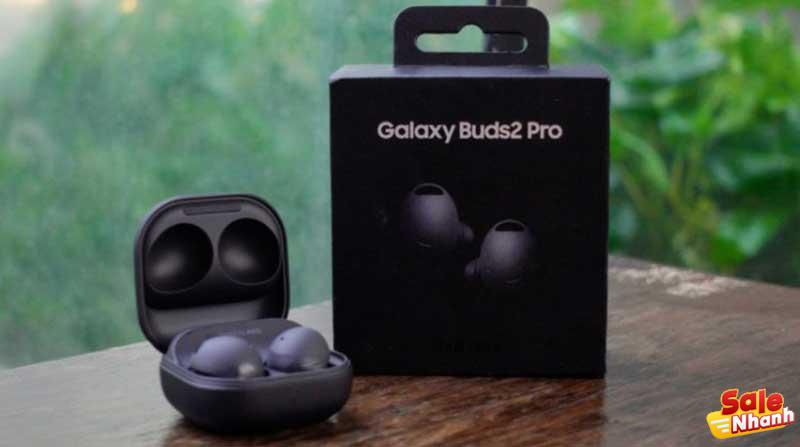 Personally, I feel more comfortable with the design of the Huawei FreeBuds Pro 2 case, although it is wider and similar to AirPods Pro, it is thinner. The opening and closing mechanism feels solid, as does the magnet when placing the headphones in the carrying case. There is only one indicator light, while to activate pairing mode simply touch and hold both earbuds together.

If you’re an early Buds Pro user and complain about the uncomfortable design (plus the glossy surface gets dirty quickly), don’t worry, you’re not alone. Many users on Reddit also complained about the same thing, then felt very relieved when switching to Galaxy Buds 2 Pro.

Oh yes, in my ears, Samsung’s latest headphones are a bit uncomfortable to use while exercising. Even with the right earbud on, I still had to reposition them after a few minutes of running. I guess it’s because there are no wing tips like the Buds Plus series. Of course this experience may be different for others.

For more effective noise cancellation from outside, each headset on the Galaxy Buds 2 Pro is supported by three microphones—two on the outside, one on the inside. Compared to other models of the same price range, the ANC on this device has the ability to eliminate external noise as well as the wind blowing quite effectively. Even without the option to set the ANC level.

Meanwhile, the transparency mode or ambient mode on the Galaxy Buds 2 Pro is still not as good as AirPods Pro, but it is comfortable to activate when you want to talk without having to remove the headset. Well, in this regard, there is a feature that I think is very convenient, which is Voice Detection.

This is the first time I am aware of a similar feature in Sony headphones. If it has been activated through the Galaxy Wearable app, you can instantly chat with others and the Galaxy Buds 2 Pro will automatically turn off ANC and activate ambient mode. Finished speaking? 10 seconds later, ANC will automatically reactivate.

How about the quality of the microphone for making calls? Voices can be heard clearly with minimal noise, although sometimes it sounds a bit machine-like—I guess it’s because of the noise cancellation algorithm. When used in a cafe with a bit loud background music, the voice will be a bit low so you have to speak a little louder.

Despite the smaller, lighter and simpler design of the earbuds, the control options are still as extensive as previous generations – for me personally, this is an attractive point. Everything can be customized, both single tap, double tap, triple tap and touch and hold, left and right.

Still missing? You can activate the shortcut to control the volume by touching the top of the Galaxy Buds 2 Pro closer to the front of your ear—it takes a bit of practice to find the right touch position. Samsung also seems to have set the sensitivity level, no need to worry about squeezing when adjusting the position of the in-ear headphones (at least rarely). 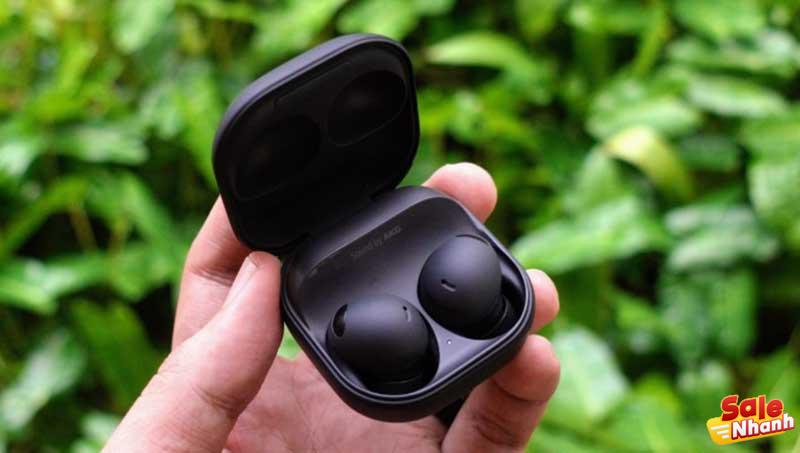 There are many additional options that can be found through the Galaxy Wearable app. I don’t enable 360 ​​audio myself because for me it’s not selling enough. The Galaxy Buds 2 Pro can also read incoming notifications, reminding users to stretch their neck occasionally when needed. And of course, it already supports seamless headphone connection, for the convenience of device switching without having to disconnect first.

It is very unfortunate that so far there is no special application for Galaxy Buds 2 Pro for iOS. I’m confused myself, because there already exists a previous series. It just takes a little while and before it becomes available you are forced to do the settings on your Android smartphone first.

Similar to the previous generation and including the standard version of the Buds 2, the Galaxy Buds 2 Pro has dual drivers for each earbud. Including separate woofers and tweeters, the output that could be produced would, in theory, be better. Moreover, it now supports high codecs via 24-bit Hi-Fi.

Unfortunately, this feature is only available when connected to a Samsung smartphone and will be activated automatically, unlike activating the LDAC or aptX features in the Settings menu of most smartphones. Android. Is the difference significant compared to when connected to an iPhone? I guess, for many people, it’s not so different.

With the small earbud size, the sound output is significantly better than the non-Pro version. His voice is wider, can clearly hear each instrument in Rex Orange County’s It’s Not The Same Anymore, even the explosive bass in the music is not overpowering but not overwhelming.

On the Galaxy Buds Plus, I had to change the EQ preset to dynamic so it didn’t sound too warm. That’s not the case with the Galaxy Buds 2 Pro, which I think has been made more neutral to suit a wider range of music. In short, quite satisfactory in its class. And don’t worry about not being able to enjoy 24-bit Hi-Fi features when using non-Samsung devices, as the difference is minor—at least for me. 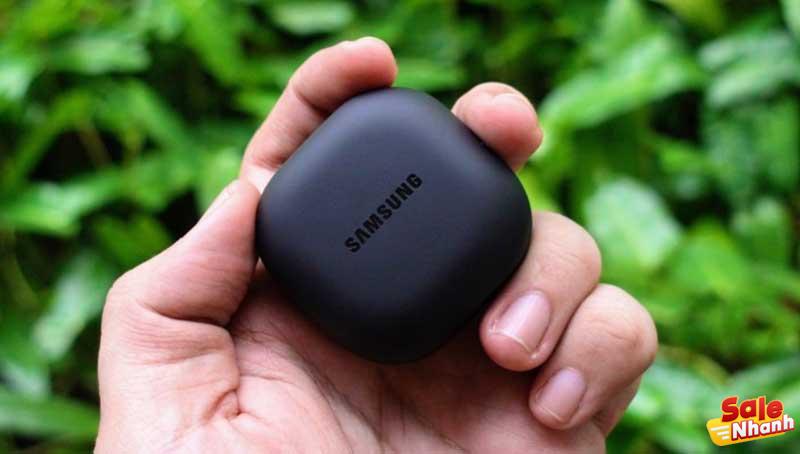 Despite its relatively small design and two drivers for each earbud, Samsung is still able to deliver quite a long battery life through the Galaxy Buds 2 Pro. According to the announcement, when activating the ANC feature, this headset can be used for nearly 5 hours. The total time with just the case is claimed to be up to 18 hours.

Not the most economical, really. But at least with ANC off, its endurance can be increased to 8 hours. It is enough for long flights or long distance trains. Charging is also flexible, you can use the USB-C port or charge it wirelessly from a compatible flagship smartphone.

To charge the headphones and the case with the cable, it takes about 80 minutes. Meanwhile, if you use wireless charging, it will of course take longer. At least there are practical options when you want to charge without using a cable.

As of 2020, I personally use the Galaxy Buds Plus as the main accessory for my TWS headphones on a daily basis. Reason? Reliable connectivity, full gesture options, and long battery life. When I switched to the Galaxy Buds 2 Pro, it felt like everything was upgraded. Both in terms of sound quality, comfort and of course the ANC feature.

Regarding the battery, at least the Galaxy Buds 2 Pro can increase its durability by turning off the ANC feature. Since you use two Android smartphones & iPhone every day, not having apps for iOS is not a big deal, only needed once in a while. But if Gizmo friends only use iPhones, that could of course be a separate issue.